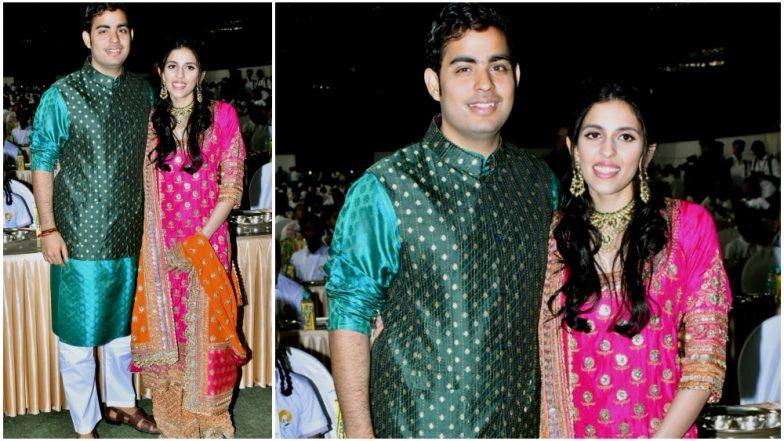 Even before Ambani scion Akash Ambani ties the knot with fiance Shloka Mehta, the daughter of diamantaire Russell Mehta, he sure as hell is giving us all some major hubby goals. The much in love couple, who will exchange vows this weekend on March 9, were spotted today alongside their respective families at the inauguration of the Dhirubhai Ambani Square at Jio World in BKC. However, what the paps spotted was way more adorable. All Set To Get Married, Akash Ambani and Shloka Mehta Come Together With Their Families For The Inauguration of Ambani Square

In a video doing the rounds, after posing for photos with their families, Akash and Shloka were asked by the media to pose together. And that is when Akash asked the media to click nice pictures of Shloka’s smile as she gets very nervous, which left Shloka blushing.

Watch the video below:

And if that was not enough, when asked to pose solo for the cameras, Akash politely refused, but pulled Shloka close and asked the media to click them together and said – ‘Ab toh shaadi ho rahi hia, Do body ek soulhai ab’, which left Shloka shy away from the cameras and us getting major hubby goals feels. Akash Ambani-Shloka Mehta Wedding Card Contains Golden Ink, Five Section Invite, Audio Feature and Special Message From Mukesh & Nita Ambani, Watch Video

From posing with Shloka at every given opportunity to holding her hands and always walking by her side, Akash Ambani has not left any opportunity to show his love for his would-be wife. If only all men were the same. After a three-day extravagant pre-wedding bash in Switzerland, the couple returned to the bay a few days back and are now gearing up for their grand wedding that will take place on March 9.

Read More:  This Littlefinger Fan Theory Could Change How You Watch Game of Thrones