The ongoing trade war between the United States and China could be set to take a significant toll on Apple‘s (NASDAQ:AAPL) business.

Per a report from Nikkei Asian Review, following the arrest of Huawei CFO Meng Wanzhou in Canada at the request of the United States, “[many] Chinese businesses have told employees they will receive subsidies if they buy Huawei smartphones to aid the company.” 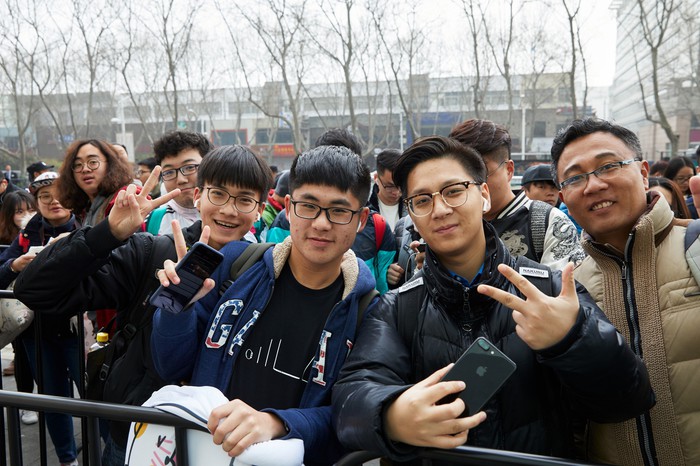 Shoppers outside Apple’s store in Nanjing, China. Will the crowds thin out? Image source: Apple.

Those subsidies are said to be between 10% and 20% of the purchase price of the devices, although the report says that “some [companies are] even covering the full amount.”

Here’s why, if you’re an Apple shareholder, this news should give you pause.

Apple does a great deal of business in China. According to the company’s most recent annual filing, it generated nearly $ 52 billion in revenue from the Greater China region — about 19.6% of sales — in fiscal 2018. Out of the five geographic regions that Apple provides revenue for, Greater China represents the third largest, following Europe and the Americas.

It’s also worth noting that Apple attributed the more than $ 7.1 billion year-over-year increase in Greater China revenue that it enjoyed in fiscal 2017 “primarily to higher net sales of iPhone and services.”

Apple doesn’t disclose how much revenue it generates from each of its product categories by region, but it’s important to note that nearly 63% of Apple’s fiscal 2018 sales came from the iPhone.

For some perspective, Huawei (as well as other Chinese brands like Xiaomi) has already been making life difficult for Apple’s iPhone business in the Greater China region (as well as worldwide). According to market research company IDC, Huawei saw its smartphone market share in the People’s Republic of China grow from 16.4% in 2016 to 20.4% in 2017. Apple’s share dropped from 9.6% to 9.3% in that same period.

So, it’s not as if Huawei wasn’t already a problem for Apple and that now, as a result of the arrest of Huawei’s CFO — which surely won’t improve the strained U.S.-China trade relations — Apple has to deal with Huawei. Instead, Huawei was already a fierce competitor, and now the competition in a large market looks even tougher for Apple.

What can Apple do?

This, the site says, “is similar to what we have seen Apple aggressively promote in the United States.”

Beyond potential short-term tactics, Apple’s best chance of success in China (and, frankly, worldwide) is to make sure that it builds compelling products that customers are willing to pay significant premiums for. Many China-based smartphone vendors, including Huawei, launch new devices at a more rapid rate than Apple does. And they are, in some cases, adopting new features and technologies before Apple does. (One example: Huawei’s highest-end smartphones ship with triple rear-facing camera systems, while Apple’s top iPhone XS and iPhone XS Max ship with dual cameras, and the iPhone XR ships with a single camera.)

Ultimately, it’ll be interesting to see how Apple copes with this latest headwind, but there don’t seem to be any easy solutions.