Beauty queen whose right leg was THREE-TIMES larger than the left due to rare swelling condition finally has matching limbs – and can box, sky-dive and salsa dance

Cruel classmates used to call her ‘Elephant Girl,’ but neither their taunting nor lymphedema, the rare condition that made Amy Rivera’s right leg swell to three times the size of her right, stopped her from becoming a beauty queen.

Amy, now 38, spent most of her life hiding her swollen leg and feeling desperately self-conscious about the fact that right side of her entire body was inflamed and larger than the left.

She was told she’d never be able to be an athlete, and would likely be confined to a wheelchair by her mid-30s.

Amy has proven all of that to be false, playing a wide range of sports, winning Junior Miss Missouri and, now, finally finding proper treatment for lymphedema that has her right leg down to just one percent larger than the left.

And all along the way, Amy has made it her mission to empower other women to embrace the features that they feel insecure about as part of their own unique beauty, and is now an advocate through her non-profit, Ninjas Fighting Lymphedema Foundation.

Amy Rivera (pictured, both) suffers from a chronic swelling condition called lymphedema, which made her right leg far larger than the left. In spite of this, she competed in and won Junior Miss Missouri (left), but continued to hide her leg under long skirts until she embraced her look and, ultimately had an operation to bring it down to just one percent larger (right)

Read More:  Everything You Need to Know About Protein Right Now

Amy’s lymphedema is a long-term chronic condition that causes swelling in the body’s tissues.

Growing up with this condition meant that the right side of her body was severely inflamed from her ears to her toes.

Her appearance would attract cruel reactions and comments from her peers, who would call her ‘elephant girl’, ‘elephant leg’ or ‘girl with the big leg’.

At the age of 18, Amy entered into a beauty pageant to prove that she can fight against her bullies and won the title of Miss Junior America, Missouri.

Despite this victory, for a decade, Amy would hide her leg under skirts and dresses to avoid the stares and comments.

Amy was told by her doctors in 2012, before her official diagnosis, that she would be in a wheelchair by the time she was 35 and would never be an athlete.

After thorough research on her condition, she found a doctor who diagnosed her with lymphedema in 2013, when she had a lymph node transfer and her first suction assisted protein lipectomies, which was unsuccessful. 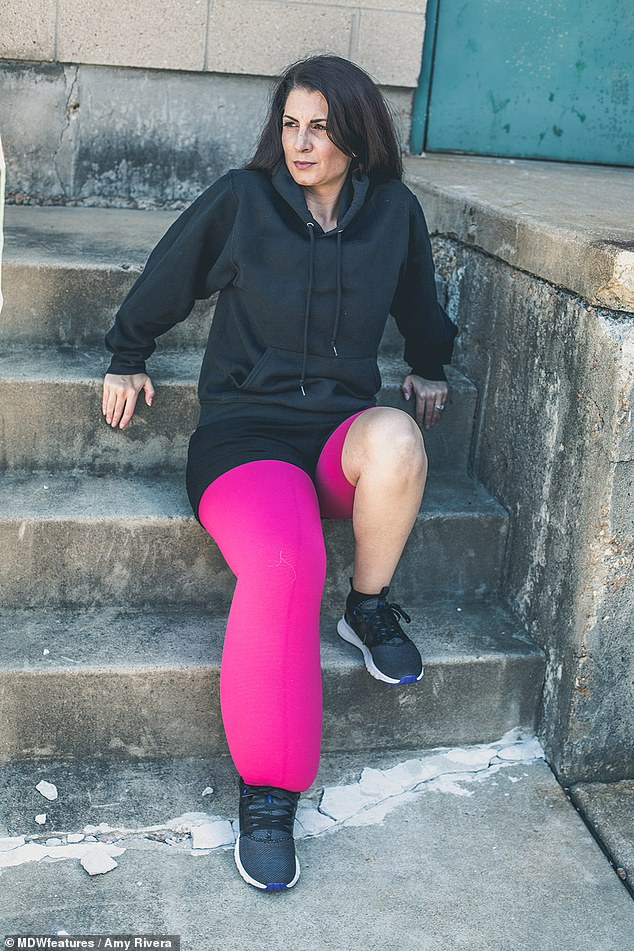 Amy had to wrap her leg to help contain the swelling, but ultimately decided not to let it keep her from being active as she’d always wanted to be

By this point, Amy’s right leg was 200 per cent larger than her left leg, so she went to another doctor who managed to successfully reduce the swelling through a procedure called suction assisted protein lipectomy.

Her right leg is now only one percent larger than her left leg.

In 2014 when one of her co-workers called herself ‘fat’, Amy felt it her duty to share her secret by lifting her skirt to show her big leg, in the hopes that it would make her colleague feel more comfortable in her own body.

This was the first step to her fully embracing her big leg, accepting herself for the way she is and not apologizing for her appearance.

She has since managed to participate in many sports such as; boxing, kickboxing, sky diving, weight lifting, yoga and is currently taking salsa dancing lessons.

‘I was born with lymphedema; my entire right side of my body was swollen from my ears to my toes. The doctor’s told my mother it was the way she carried me (which was not the case),’ Amy said. 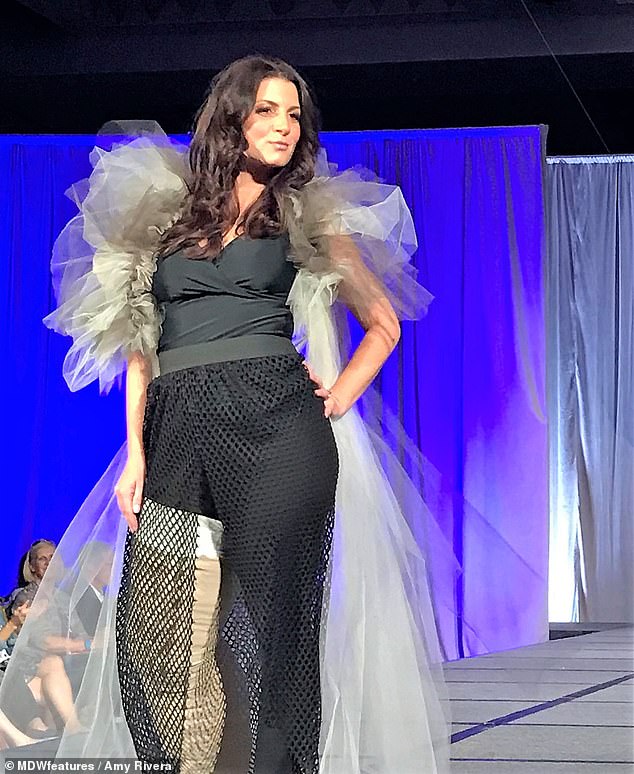 As she grew up, Amy became more confident about her leg being part of her ‘look’ and encouraged others to embrace their insecurities, too

Read More:  This Fast-Food Restaurant Is the Safest in the Country Right Now 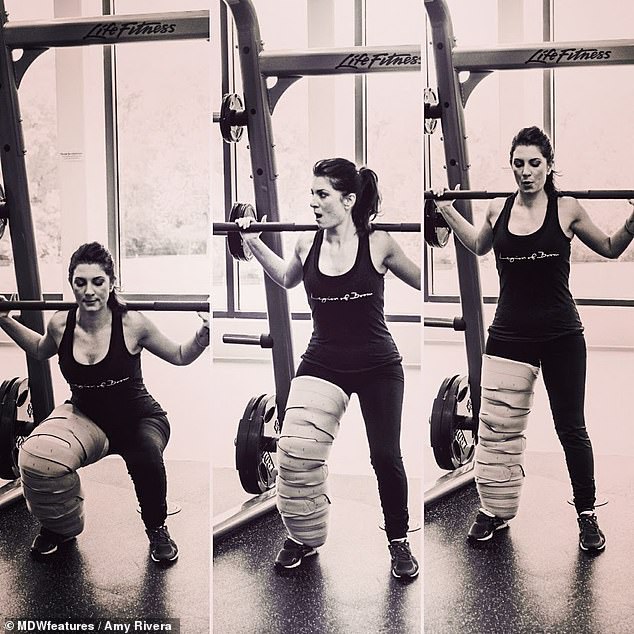 She pushed herself to learn to do things she’d always been told were impossible, like doing back squats, even while her right leg was three times the size of the left

‘The swelling went away everywhere except for my leg. My parents searched for answers but were told it was ‘general swelling’ and there was nothing we can do about it nor know what is causing it.

‘I’ve never known life to be any other way than being stared at. I was callused to the comments and stares.

‘People would call me the elephant leg, elephant girl, girl with the big leg. I punched a boy in the face at one point in time because he pointed at me and called me ‘weird’.

‘I had several others point at me in the school hallway. That was the turning point that I decided to find a new identity which is why I entered pageants.

‘In order to ‘fit’ in, I entered pageants and actually won – funny how that worked out, but it didn’t really make me feel good about myself.

‘I was still the ‘girl with the big leg’, just with a Miss Junior America (Missouri) title and a tiara. As an adult, someone at a local mall asked me if they could ‘catch’ what I had.

Tired of the mean words and the impediment to her life, Amy tried a series of medical procedures to address her lymphedema in 2013.

First, she had a lymph node transplant, then had two suction-assisted lipectomies, to try to surgically remove the excess lipids that had build up in her leg over the years.

But it didn’t work.

By the time she got to Dr Jay Granzow, her right leg was several times larger than her left. 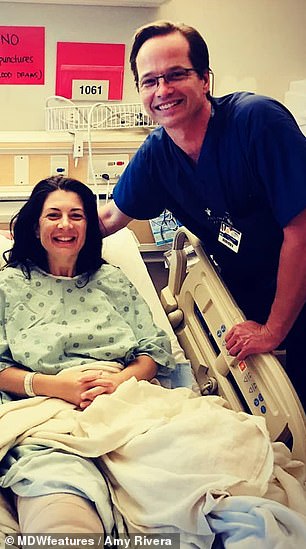 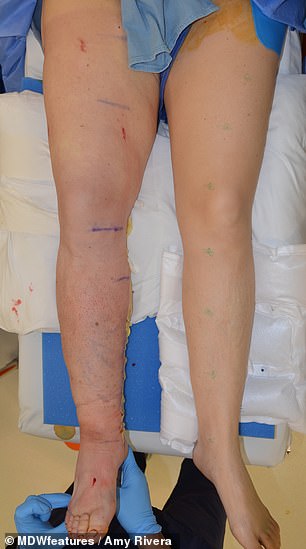 At last, in 2014, Amy had procedures to remove the solids that had built up in her leg as a result of her faulty lymphatic system, which were performed by Dr Jay Granzow (left).  After the procedure, her right leg’s swelling was drastically reduced. Now, it’s just one percent larger than the left (right)

The next procedure was a success.

‘My right leg was two-hundred percent larger than my left leg when I started this reduction journey and now my leg is one percent larger at this point,’ Amy said.

Lymphedema can affect any part of the body but mostly it develops in the arms or legs. It develops when the lymphatic system doesn’t work properly.

Read More:  When It Comes To Mental Health, Common Sense Isn't So Common

The lymphatic system is a network of channels and glands throughout the body that helps fight infection and remove excess fluid.

It can get progressively worse if it is not treated in a timely fashion. There are two types of lymphedema; primary and secondary.

Primary lymphedema is caused by alterations in genes responsible for the development of the lymphatic system.

Secondary lymphedema develops in people who previously had a normal lymphatic system that then becomes damaged.

Amy says that her co-worker’s body insecurities helped motivate her to ‘lead by example’ by ditching the long skirts and dresses. 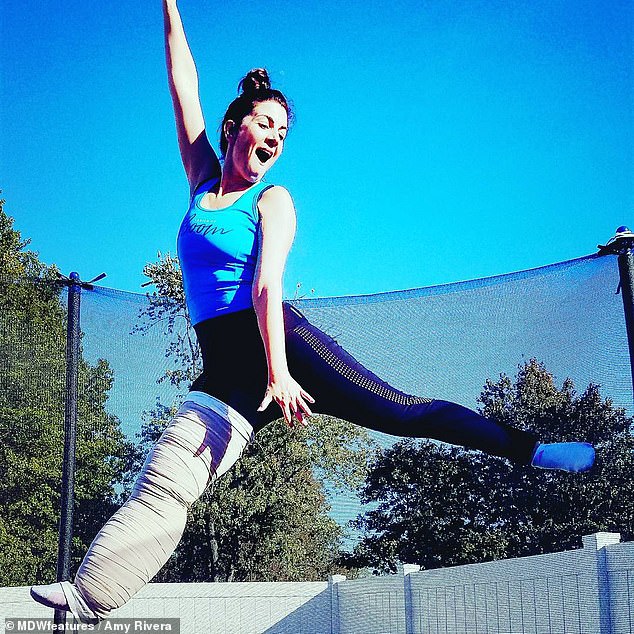 Even when her leg was still inflamed, Amy was determined to live her life to the fullest, including jumping on trampolines 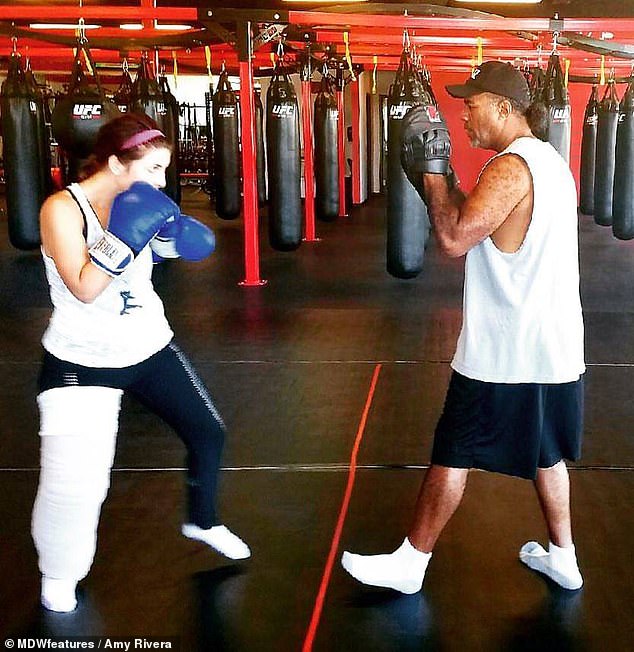 She took up boxing, relishing the opportunity to get competitive 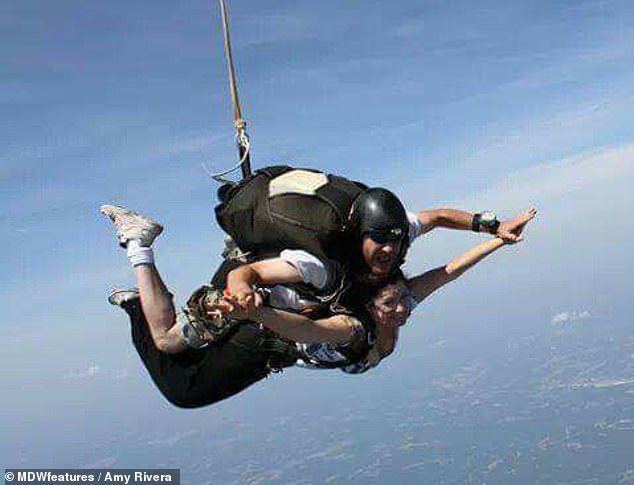 Freedom: Amy even took to the skies for a sky-diving session before her leg procedure

‘I hid my lymphedema from the world for well over a decade and one day I was talking with a co-worker who body shamed herself for being “fat” and I immediately felt compelled to share my secret that I hid under the skirts and dresses,’ she said.

‘I wanted her to feel comfortable in her own body but in order to do that I had to accept mine and lead by example. Once I did that, I embraced the title ‘beauty queen with the big leg’ ever since.

‘I wouldn’t trade my experiences for anything; I call my disease my blessing because I’m able to help others find their way out of the darkness and begin to heal and love themselves. I truly love myself and love that I have a calling to help heal others.’

Amy always wanted desperately to play and participate in sports, but her condition made that impossible as a child and teenager.

‘I decided to take charge of my life and do what I wanted. I was tired of not living,’ she said.

‘I love boxing, kickboxing, sky diving, weight lifting, yoga and I picked up a new interest in learning how to salsa dance now that I can.

‘My leg has never been this small ever and my family and friends are just shocked; they stare with astonishment rather than with pity.

‘I had the world against me in the beginning and even during my journey – today, they say ‘I can’t believe you did it’. I knew I could, and I wasn’t going to allow the world to tell me I couldn’t.’