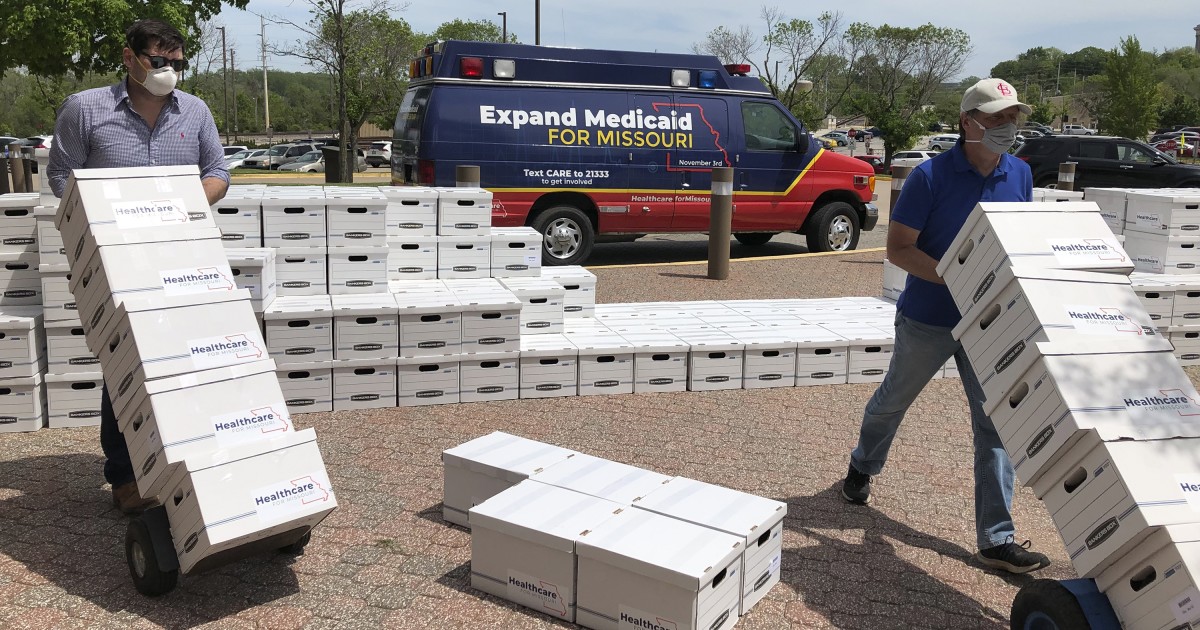 The newly enacted $ 1.9 trillion spending bill includes additional funding of as much as $ 22.5 billion for states that have not yet expanded their Medicaid programs under Obamacare. Red states that have long resisted the expansion of the low-income government healthcare program will now find it hard to turn down the money.

Indeed, the state of Wyoming has taken a small, although possibly inadvertent, step toward expansion.

Medicaid is funded by both state and federal dollars. The federal government matches what states spend on the program under what is known as the Federal Medical Assistance Percentage. FMAP is determined by a state’s per capita income so that poorer states tend to receive larger FMAPs. For example, Mississippi, the poorest state in the country, receives an FMAP of 84%.

Under the 2010 Affordable Care Act, also known as Obamacare, states have the option of expanding their Medicare programs to cover people up to 138% of the federal poverty level. The federal government funds 90% of Medicaid expansion.

Twelve states have yet to expand Medicaid: Alabama, Florida, Georgia, Kansas, Mississippi, North Carolina, South Carolina, South Dakota, Tennessee, Texas, Wisconsin, and Wyoming. Voters in two other states, Missouri and Oklahoma, passed ballot initiatives last year expanding their Medicaid programs, although the legislatures in those states have yet to allocate the funding.

If those states agree to expand their Medicaid programs, they will receive an FMAP increase of 5 percentage points for two years under the American Rescue Plan Act.

“This makes what was a good deal and a good idea even better,” said Jesse Cross-Call, a senior policy analyst in the health policy division at the liberal Center on Budget and Policy Priorities. “In the non-expansion states, there are millions of people without healthcare. In the middle of a pandemic and recession, the need is there.”

Read More:  This year's flu shot will likely be ineffective in the US, UK and Canada, expert warns

For those 14 states, the FMAP increase could mean an additional $ 22.5 billion for their Medicaid budgets for two years, according to an analysis by the CBPP.

But some argue that money will come with strings attached.

“I worry for the states that the money is lulling them to sleep,” said Nina Owcharenki Schaefer, a senior research fellow for health policy at the conservative Heritage Foundation. “The more the federal government controls the funding, the more it will interfere with and limit what states can do with Medicaid.”

For Wyoming, expansion could mean an extra $ 120 million in Medicaid funding over two years.

A bill to expand Medicaid in Wyoming passed out the state Senate’s Labor, Health and Social Services Committee Monday evening by a 3-2 vote. State Sen. Chris Rothfuss, a Democrat from Laramie, introduced the bill.

The FMAP increase factored into the debate over it.

“The increase was definitely some that was presented by Sen. Rothfuss. He spoke about that,” said Cassie Craven, an attorney and lobbyist for the conservative Wyoming Liberty Group.

Rebekah Smith, the director of the liberal Wyoming Women’s Foundation, added that the Labor, Health and Social Services Committee “discussed the FMAP boost in the American Rescue Act Plan and asked questions about it. However, I would say the conversation included a larger picture.”

However, the expansion bill may have made it out of committee because one of the members, state Sen. Troy McKeown, a Republican from Campbell County, voted for it by mistake.

Read More:  Who is best multivitamin

“Sen. McKeown is a new legislator this year, and I think he got confused and voted the wrong way,” said Craven. “I’ve spoken to him a couple of times, and I think he would tell you that same thing.”

McKeown was critical of the bill during the committee hearing. He did not respond to the Washington Examiner’s request for comment.

Yet, that possible mistake may not necessarily mean that the bill has no chance in the wider legislature.

“Many legislators know constituents who have been impacted by the recent energy and pandemic-related downturn in Wyoming. That may result in the conversation sounding a bit different than in past sessions,” said Smith.

Craven agrees that Wyoming’s economic downturn could result in the bill being passed. But she notes another obstacle.

“Even the small contribution, the 10%, that the federal government requires, we don’t have it,” Craven said. “Wyoming is in a pretty big fiscal crisis.”

The drop in energy prices during the pandemic caused tax revenues to decline in Wyoming, putting the state budget in a hole. Currently, the legislature is looking to make about $ 450 million in cuts.

Right now, legislative calendars may be working against Medicaid expansion. Three of the 14 states that have not yet expanded Medicaid end their legislative sessions in March, and three more, including Wyoming, end their sessions in April. Only North Carolina, which goes until July 30, does not end by May.

Yet, there is no rush. The American Rescue Plan Act puts no time limit on when states can expand Medicaid and qualify for the FMAP increase.

Cross-Call argued that will make a difference.

“I think it will make states look anew at expansion,” he said. “If cost has been a concern to expansion, this increase in funding should take that away.”

CLICK HERE TO READ MORE FROM THE WASHINGTON EXAMINER

“Many of the states that haven’t expanded Medicaid have been pretty strong against Medicaid expansion,” she said. “I think that is due to their opposition to Obamacare.”