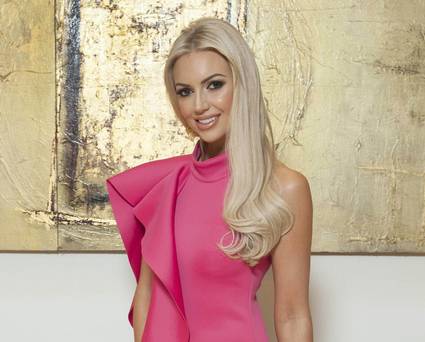 The 35-year-old has revealed that she has endured the pain of multiple miscarriages while trying for a baby with her husband Wes Quirke. She underwent various treatments and surgery in an attempt to conceive but has just announced that after a “long and tough journey”, she and Quirke are now expecting a baby girl who will be born via a surrogate at the end of the year.

It’s wonderful news for the couple, who like so many others, “dreamed of being parents for many years” but went through many years of heartache before reaching this stage.

Defined as the spontaneous end of a pregnancy before 20 weeks of gestation, miscarriage occurs in around one in every five pregnancies in Ireland – that’s around 14,000 miscarriages a year or around 50 per day.

These are shocking statistics and while miscarriage is all too common, there remains a stigma attached to it. Many women feel like they can’t talk openly about it, particularly if they’ve endured more than one pregnancy loss.

Elaine Bohan understands something of what Davison has been through. She has lost two babies to miscarriage and says people “didn’t really know how to react” around her.

“I’ve always wanted to be a mother but wanted to wait until I was married, so as soon as we jetted off on honeymoon, we started trying,” says the 37-year-old. “It didn’t happen immediately, but that wasn’t a problem and then after about eight months of marriage, I missed a period and went straight out to buy a pregnancy test. When it showed up positive, I was absolutely squealing with joy and excitement.

“I was bursting to tell people the news and while my husband said we should wait until 12 weeks, I couldn’t keep it in so we told our immediate families and my two best friends. Everyone was so excited for us.

Read More:  Why does zetia cause muscle pain

“But at 10 weeks, I started to bleed and was frozen with shock initially. I called John and he could hardly understand what I was saying because I was crying so much and by the time he came home, it was all over and I had lost the baby. It was a truly horrendous experience and was particularly awful having to tell people about it as no one really knew what to say. They were, of course, sorry for us, but when I was still devastated a month or so later, they didn’t know how to react and I got the feeling that some were a bit perplexed as they couldn’t understand how I was still very emotional as I hadn’t lost an ‘actual’ baby.”

After several months, the Dublin woman became pregnant again and although she was thrilled, this time was more cautious about telling people. But tragically not long after she revealed her news she miscarried again.

“When I discovered that I was pregnant for the second time, I was so excited but determined not to jinx things by telling people too early,” she says. “I waited until after the 12 weeks were up and then rang my parents and told my friends. Everyone was so happy for us and I think secretly a bit relieved as they thought I would forget what happened the first time around.

“But less than a week after I revealed the news, I got some spotting and while my heart was in my mouth, I got straight into the car and went to the doctor. I was seen straight away as I was a bit frantic – I knew when she tried to listen for the heartbeat that the same thing was happening again. I was utterly inconsolable and I miscarried there in the surgery.

“John arrived to take me home (the doctor wanted me to go to hospital to be monitored but I couldn’t face it) and I could see he was devastated too but did everything he could to mind me first. Having a miscarriage is a horrible experience, but to go through it twice is really cruel and I just couldn’t understand why this was happening to us.

“At this point we had told so many people and I couldn’t bear telling them that it was over.

“John rang my mum who said she would tell people and while most were very supportive initially, I don’t think anyone really understood what it was like for us – we felt like we had lost two children and all of the life we had planned for them.”

Psychologist Peadar Maxwell says society in general has made a lot of progress with being able to talk about miscarriage but we still have a way to go. “The sense of loss can be profound and cause feelings of depression and sadness which should not be ignored,” he advises.

“Talk to sympathetic family and friends, take your time to grieve the loss of your baby and your dreams – only you know how long that will take,” she advises. “And if you feel you need professional support contact Féileacáin.”

Psychotherapist Stella O’Malley says the trauma of miscarriage can ‘depend on the context’.

“Sometimes one miscarriage can be endured well but another, at a different time, can feel completely overwhelming,” she says. “And multiple miscarriages tend to raise all sorts of feelings about how life isn’t fair and how some people seem to breeze through. And it’s true – some people have it so much harder than others.

“Once we realise that we have been dealt a series of bitter blows, all we can do is be kind to ourselves and surround ourselves with the people we love.

Read More:  Essential Details to Keep in mind When Getting Suffering from diabetes issues Materials Online

“However, sometimes friends and family don’t know what to say. But really there’s no need to say anything. I believe the most valuable thing to offer (someone who has miscarried) is your presence. There is no need for inspiring words or funny stories to make the woman feel better, just being there and showing that you stand with them is all you can do.

According to the HSE, while miscarriage is a common and very upsetting occurrence, it doesn’t always mean that future pregnancies are not possible.

“Most women will have a successful pregnancy after miscarriage,” says a spokeswoman.

“Having one or two miscarriages does not mean you are at higher risk for miscarriage in the future. But if you have three miscarriages, there might be a medical reason as some conditions make it more likely to miscarry. If this is the case, speak with your GP about treatment options.”

And indeed while Elaine Bohan did suffer two miscarriages, she is currently well into her third pregnancy and so far everything is going to plan.

“I was so traumatised after my miscarriages and never thought I would become pregnant again,” she says.

“But I did and am now over six months pregnant – I have been monitored every step of the way and all seems to be fine. We are beyond excited and cannot wait to welcome our new baby – but we will never forget the two we lost.”