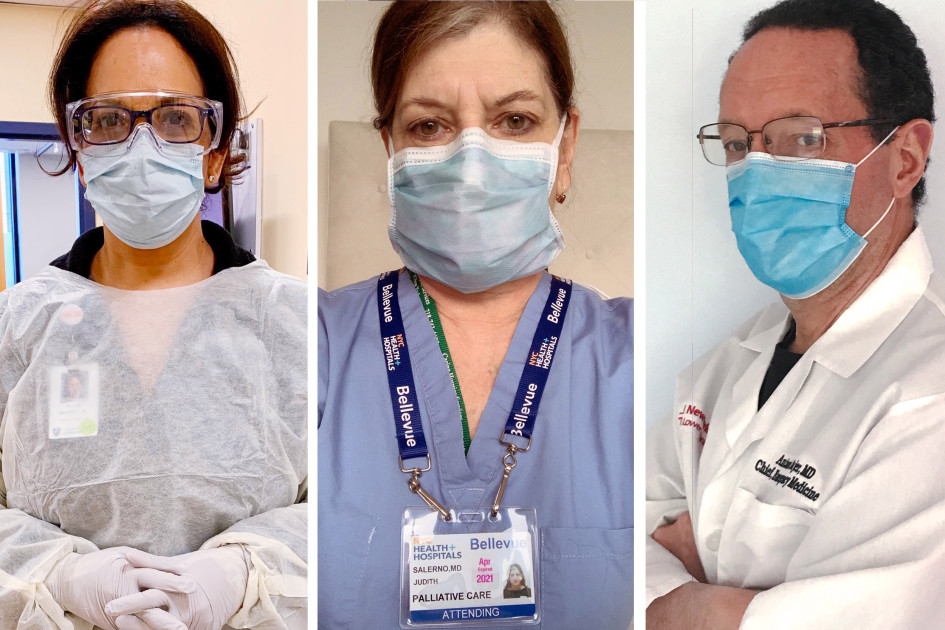 GAZETTE: You’re in an emergency room at the center of the pandemic in the U.S. Can you tell us what that’s like right now?

DAJER: Early on what was very distinctive about New York was how blind we were flying, how restrictive testing was initially. We all suspected that it was about to hit New York in early March, but we really had very little idea of what we were about to deal with, even though we all had a lot of anxiety about it. In the first 10 days, every day was another ratcheting up of the acuity and the severity of what we were seeing: the patients who would be decompensating quickly, the colleagues who were getting sick, and how suddenly scary it was — we weren’t clear what the threat to ourselves was. We were advised to use protective gear, but we weren’t sure how much we needed and whether it was working. Right now it is certainly anxiety-provoking. It is more an enemy that you’ve recognized, one you now have the measure of, as opposed to this complete blindness we had at first.

GAZETTE: Is there some particular problem area that you see?

DAJER: What’s very unique about the U.S. and our situation is our lack of testing. Testing is still a difficult proposition, even in research institutions in New York City. It’s not on-demand; you still have to meet certain criteria, which at the moment are appropriate given the supply. Until we get even the basics of population testing, this will be out of control, or not only out of control, but will recur in ways that we don’t predict; hotspots will keep cropping up. And I think that that’s a difficult concept to convey, even though there’s a lot of pressure to say that testing is adequate. Now, it definitely is not [adequate], even today.

GAZETTE: We hear a lot about COVID-19 on the news all the time. Are there things you see that we wouldn’t necessarily know about? Is there a story that’s not being told?

DAJER: Though it has been hinted at in some reports, the negative untold story is how many deaths are happening without being tallied — the true total of the epidemic. We all see it every day. The paramedics, the medics, the ambulances go out to households, and there’s a patient in cardiac arrest. Those deaths are not tallied. If you don’t have a positive test or are not assessed in the hospital, you don’t make the “official count,” which is sort of mind-boggling, but that’s where we are right now. In a few months, if we go back and look at our mortality rates during this period compared to a year ago, I think we’re going to be fairly shocked at how deeply destructive this epidemic was, even more than we imagined.

GAZETTE: What are you seeing that inspires you, keeps you going?

DAJER: On the front lines, what’s deeply impressive are the nurses. They’re the ones who spend the most time with patients and are the most heroic by far. So are the paramedics and emergency medical technicians who were taking patients from households that probably have six family members infected with COVID. They are exposing themselves to very high chances of catching it themselves. I’m certainly scared, but I’m not nearly as exposed as those folks are. The housekeepers and environmental folks who clean patients’ rooms are at a super-high risk and are really the unsung heroes. The other heartening part is how quickly clinical folks learn, how we’re sharing information on an hourly basis, how rapidly escalating our understanding of the disease is. Certainly that was helped by the Italians sharing information as they were dealing with their crisis. It’s very much an all-hands-on-deck situation where surprising amounts of capacity are being created with the folks at hand. Those in cardiology practices, whose most important practice is outpatient cardiology, are now being redeployed as ICU doctors. They are opening full intensive-care units with doctors who have not been in one for years but have the skills that they can immediately rapidly ramp up again.

Read More:  What Do You Know About Beauty

“The enormity of what’s happening right now is so great that no one’s going to come out of this feeling like a hero.”

GAZETTE: You’ve had a range of experiences in emergency care over your career. You were in what was then called N.Y.U. Downtown Hospital, the closest hospital to the World Trade Center in September 2001, for instance. Do you think your past experiences helped prepared you for this?

DAJER: I learned from that experience that clear leadership and full transparency are really critical. When you’re in a knowledge deficit — with a new phenomenon, things changing very rapidly — knowing who’s in charge and being able to trust that authority as being knowledgeable, that is really critical. I think we’ve done a pretty good job of that. But it’s also finding new ways to support each other.

GAZETTE: Are there any other comparisons that come to mind?

DAJER: One thing that I found very difficult after 9/11 was how fast and impersonal it was, that even though you obviously were dealing with very intense moments with patients, you didn’t get to know them well. This particular disaster [the COVID-19 pandemic] is going to be very difficult because of the impersonality of it: Patients are being forced to be isolated; we’re not really comfortable getting near them for too long; we’re not getting to know them; and the sickest patients are on ventilators and can’t talk to you. So there’s a lot of emotional distancing that will be difficult afterwards. Since 9/11, I have stayed in touch over all these years with the widow of a patient who unfortunately died a few months after 9/11. Yesterday, she sent me an email just wondering how I was doing. That kind of emotional connection to your patients, as well as obviously your colleagues, it’s a tough thing to maintain. But you really need to figure out a way to explore it. Right now, we doctors have a support group, where we do a Zoom meeting once a week where we just share experiences and catch each other up on how we’re dealing with this — from a clinical pearls standpoint and also from an emotional [standpoint]. For example, “How do you make sure you’re safe? How do you coordinate your teams?” Just how you’re feeling.

GAZETTE: Are you anticipating any particular emotional fallout for medical workers?

DAJER: It is surprising that people feel that they haven’t accomplished anything at the end. The enormity of what’s happening right now is so great that no one’s going to come out of this feeling like a hero. The ICU folks are going to feel like they lost too many patients. The ER people are going to feel like they didn’t intubate patients in time or that they missed a few signals, or that they didn’t save more lives. It’s a very pervasive and corroding thing. In the weeks after 9/11, even people who were in the thick of it doing heroic work, they were all saying to me exactly the same thing: They felt they hadn’t done enough. It’s the human condition: When we’re witnessing something terrible, you somehow think it’s your fault.

GAZETTE: Are you in touch with any of your former classmates during this tough time?

DAJER: My three freshmen roommates have been incredibly supportive. Two of them are also doctors, though not ER doctors. We are emailing or talking every couple of days. It is a nice feeling of solidarity, knowing that people with great integrity and commitment are on the frontlines in other areas as well. It is a nice feeling that we’re all still working toward that better world that we all were trained for.

Marshall is a Harvard Medical School instructor, a Mass. General staff physician, and an urgent-care physician who has spent 20 years at the MGH Chelsea Health Center in Massachusetts, where she works with low-income and immigrant communities. Marshall is also an Emmy Award-winning health reporter at CBS Boston/WBZ-TV.