Since the allegations of Harvey Weinstein’s sexual misconduct in Hollywood broke open the #MeToo movement one year ago, empowered victims have stepped forward and perpetrators have been stripped of their power and taken to task. Throughout the media storm, we men have been asked to reconcile our own conduct while serving as allies. All the while, we’ve been navigating a new dynamic between men and women in the workplace, the dating world, and our long-term relationships.

With high-profile stories continuing to emerge, how much have we really changed? Are we living differently? How are the women in our lives thinking and acting differently? Men’s Health partnered with Women’s Health and SurveyMonkey to ask more than 3,000 American men and women what they think of the #MeToo movement now and how it’s affected their lives. Turns out a lot of us have some catching up to do.

#MeToo A Year Later: By the Numbers 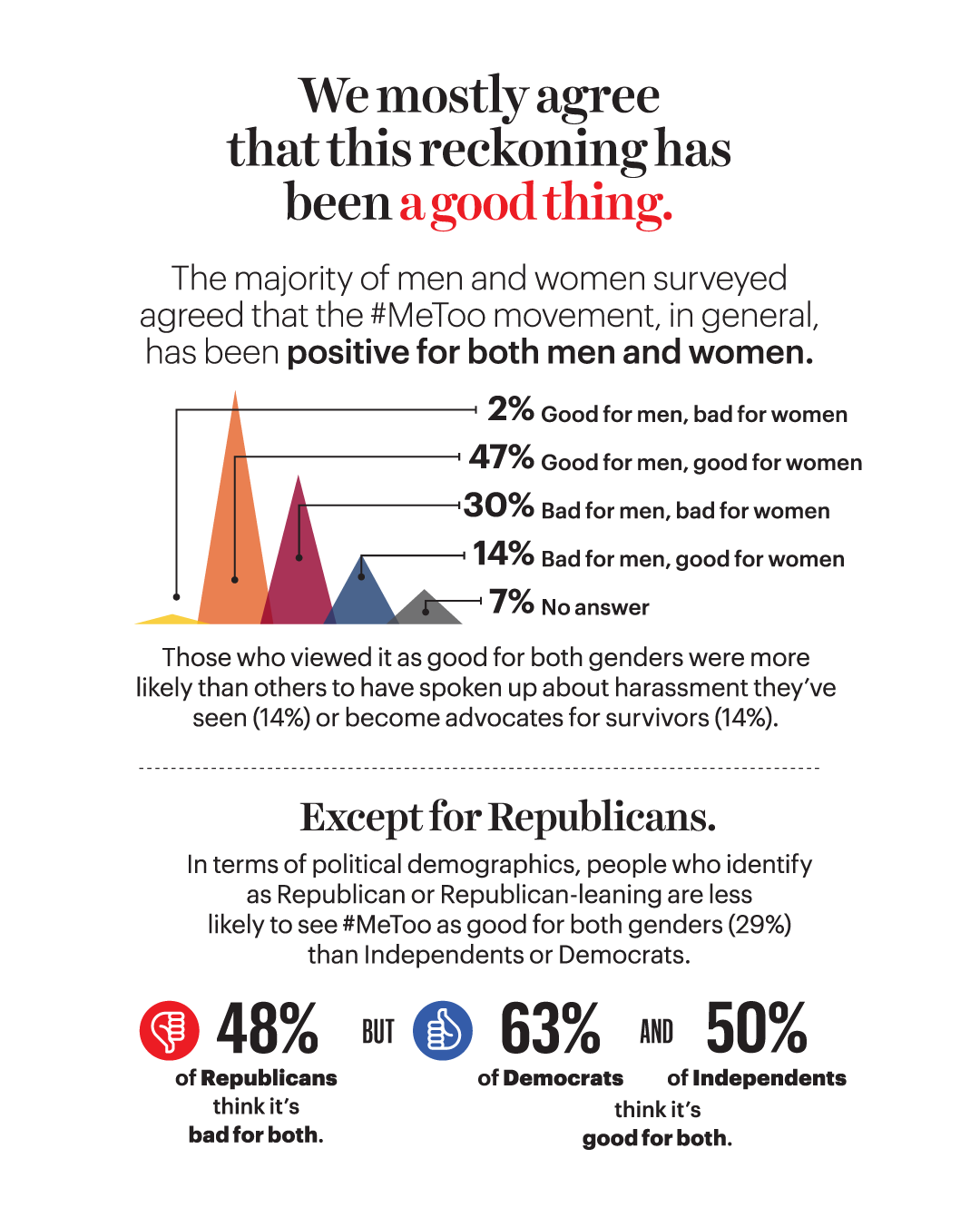 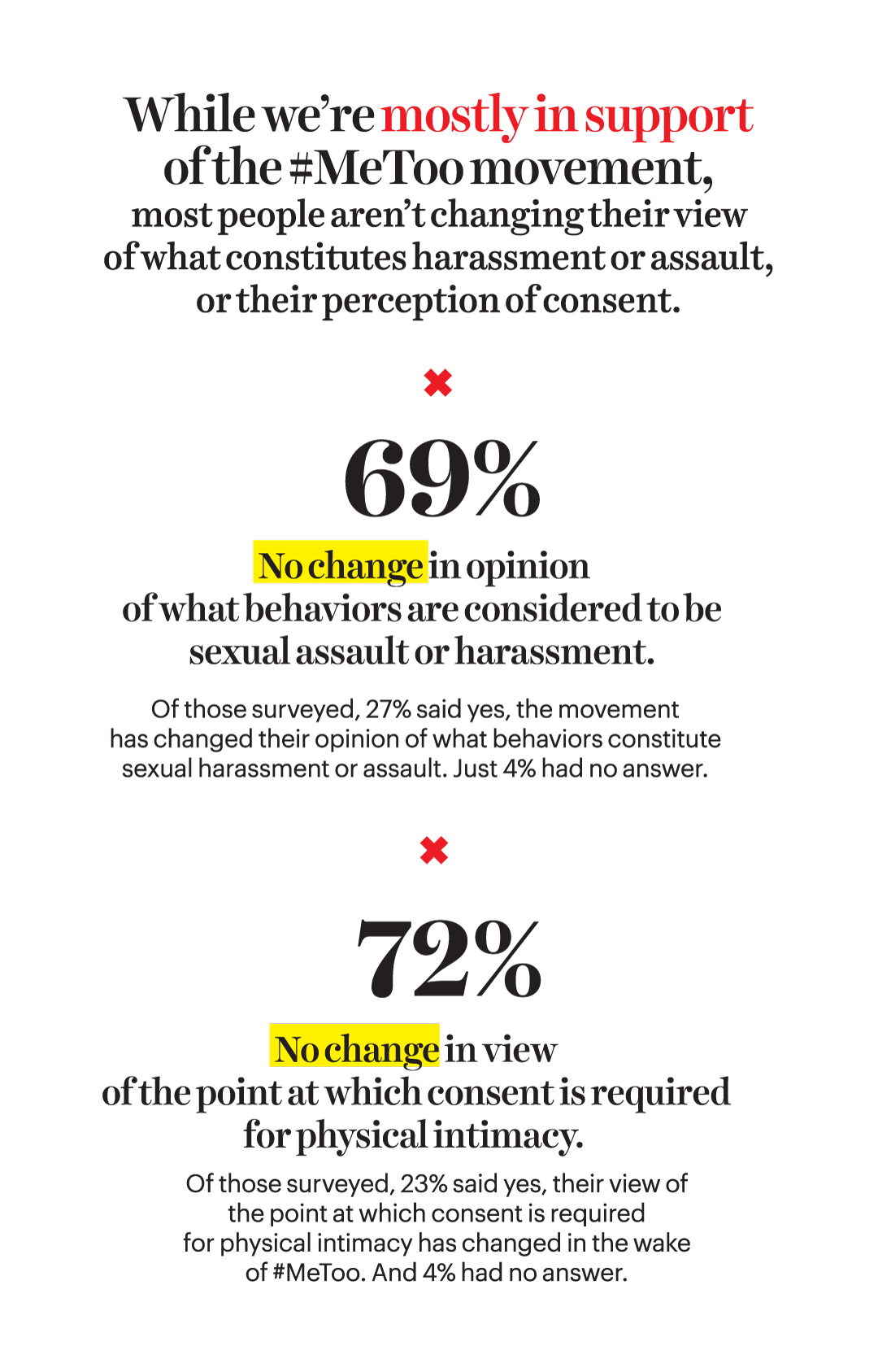 Men’s Health editors asked us so many important questions for this story. Like: “Is it creepy to offer to buy a woman a drink at a bar now?” (Not at all, but if she declines, don’t push it, bud.) “If women have always been offended, why are they only speaking up now?” (We have been speaking up, but it took a bunch of moguls to get called out as molesters for everyone to listen.) And, finally, “how can men be supportive?”

We’re so glad you asked. The truth is, men are much more likely to listen to other men when it comes to this stuff.

Read More:  Some Facts About Most Popular Infertility Pill Every Man Should Learn Posted By : Jeremy Babyson

Most of it is common sense. If a coworker does something out of line, report him. If a friend says something crude or sexist in mixed company, give the women a chance to tell him he’s wrong, and if they do, back them up. If they choose not to engage, you have the green light to say, “Not cool, dude.” It’s all on you to stop demeaning “locker-room talk.” (Can we eliminate this concept altogether?) You might catch some grief, but those little interactions are influential.

Even better? Ask the women in your life, “How can I help?” Pay attention and be open to making changes. If you want to offer support on a public level, ask HR to host a meeting on sexual harassment or help out at a volunteer program for assault victims. In these situations, just show up and listen. 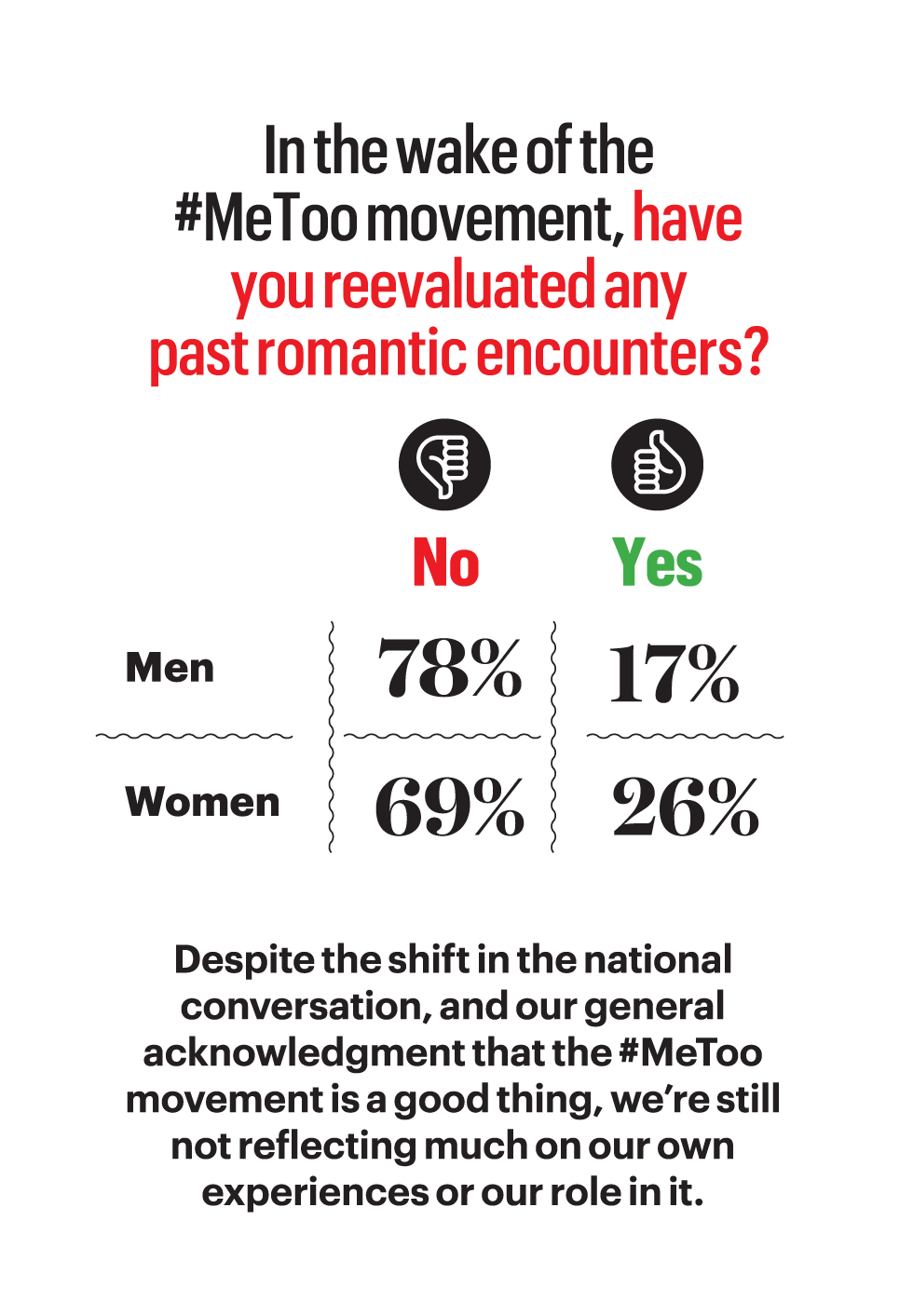 One of the most important things individual men can do in light of #MeToo is talk with other men. “There are less macho conversations that guys need to have with their guy friends,” says Avi Klein, L.C.S.W., a psychotherapist in New York City who sees male patients working through their own conduct in the wake of #MeToo. 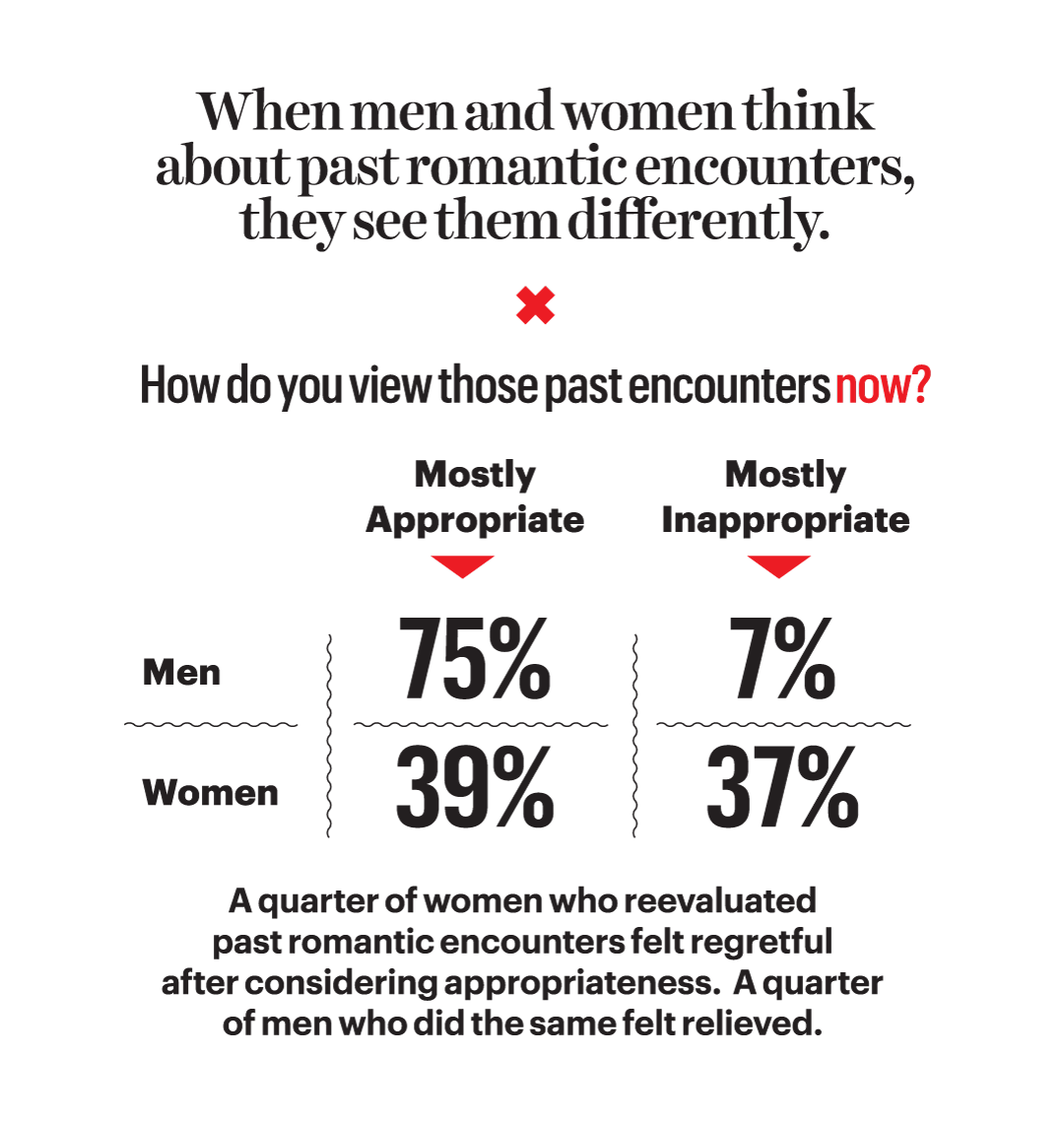 What often keeps guys from reconciling past sexual encounters they’re uncomfortable with is a sense of shame, the feeling that they are alone in their actions and experiences, says Klein. If you’re trying to work through some of the ways you’ve acted in the past, start a conversation with a friend by saying, “There’s something on my mind. I’d really like to talk about it with you.” “You’re giving that person permission to talk about things that are hard for them too with you,” Klein says. 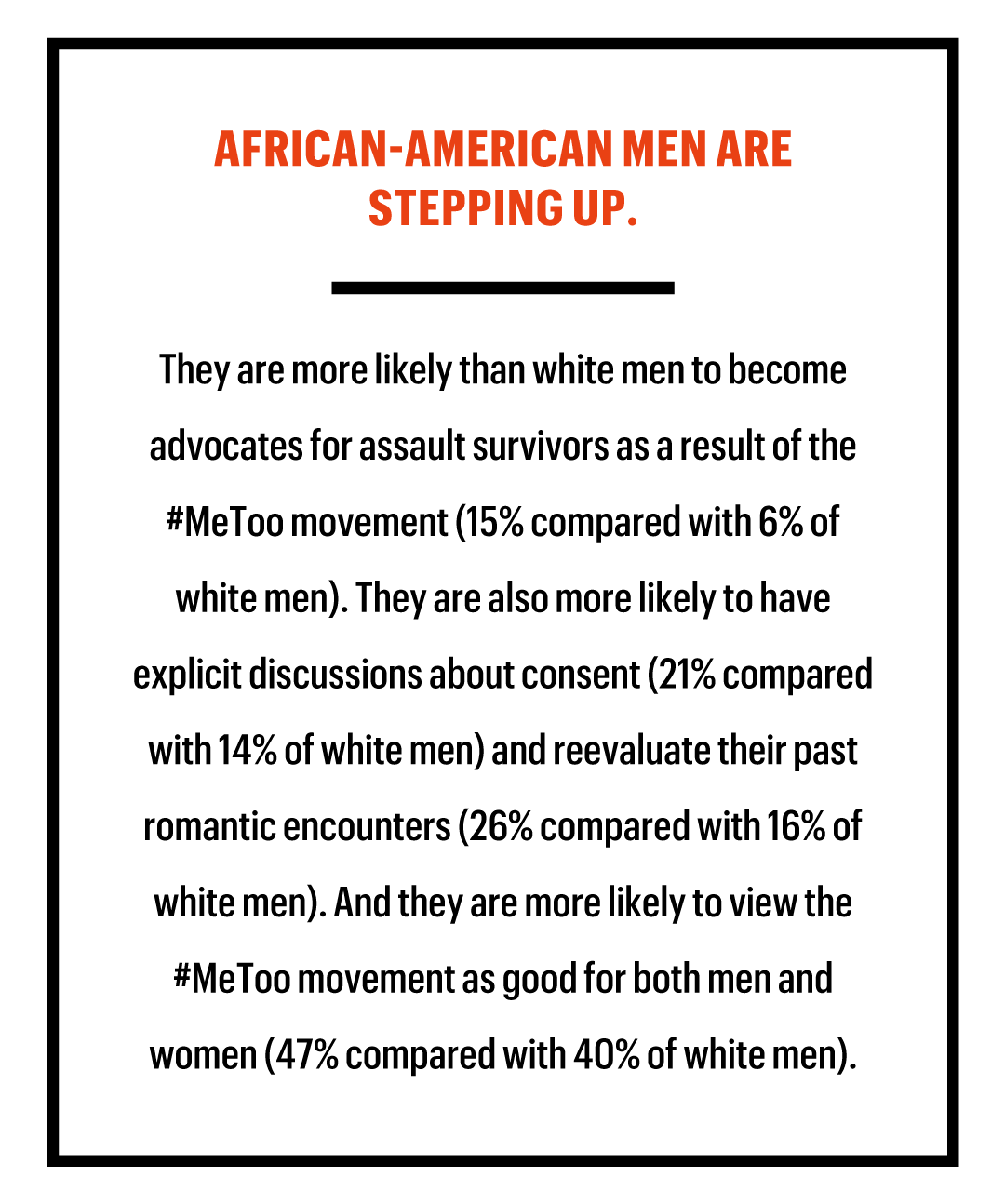 When it comes to speaking up, he says we tend to write off a lot of bad behavior with “He’s still a good guy.” If you want to address a friend’s treatment of women, ask to talk, but tell him you’re worried about how it’s going to affect your relationship. “Say, ‘I want to check in with you. Is it okay to give you some honest feedback?’” advises Klein. If it’s coming from a place of care and for his own benefit, he’s going to be much more receptive.

Read More:  Lottery like no other offers a cutting-edge medicine — with lives on the line - STAT

A version of this article appeared in the October 2018 issue of Men’s Health Magazine.