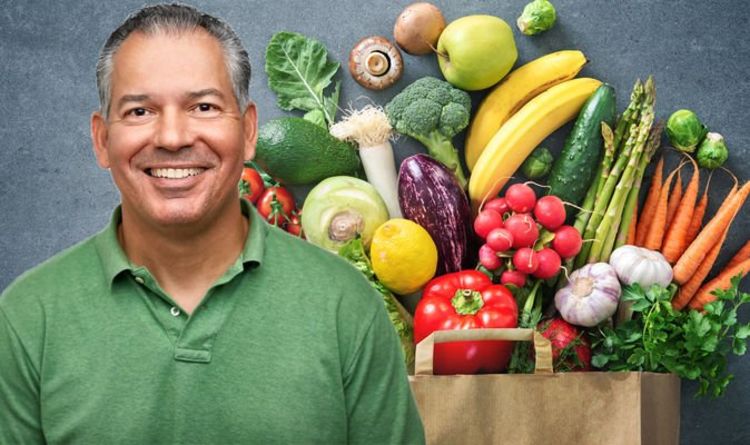 The greatest threats to life expectancy, such as heart disease, usually come as a result of unhealthy lifestyle decisions.

Heart disease is a major cause of death both in the UK and worldwide yet it is largely preventable if measures are taken to avert the risk.

Eating a healthy, balanced diet plays a key role in fending off life-threatening complications such as heart disease and the importance of eating fruit and vegetables in particular cannot be overstated.

The famous ‘5 A Day’ campaign is based on advice from the World Health Organisation (WHO), which recommends eating a minimum of 400 grams (g) of fruit and vegetables a day to lower your risk of developing serious health complications.

Evidence published in the International Journal of Epidemiology suggests this figure is too conservative and in fact doubling it to 10 portions, or 800g, of fruit and vegetables a day provides much greater benefit.

The findings are the result of a large-scale meta-analysis of all available research in populations worldwide, including up to two million people, and assessed up to 43,000 cases of heart disease, 47,000 cases of stroke, 81,000 cases of cardiovascular disease, 112,000 cancer cases and 94,000 deaths.

The research team estimate approximately 7.8 million premature deaths worldwide could be potentially prevented every year if people ate 10 portions, or 800 g, of fruit and vegetables a day.

The team also analysed which types of fruit and vegetables provided the greatest protection against disease.

Commenting on their approach, Dr Dagfinn Aune, lead author of the research from the School of Public Health at Imperial College London, said: “We wanted to investigate how much fruit and vegetables you need to eat to gain the maximum protection against disease, and premature death. Our results suggest that although five portions of fruit and vegetables is good, ten a day is even better.”

Vitamin D deficiency symptoms: Pain in this body part could signal a lack of vitamin D [INSIGHT]
Type 2 diabetes: Do you feel like this? It could be a warning sign of the condition [INSIGHT]
Tom Hanks health: Actor says he was ‘a total idiot’ after being diagnosed with condition [INSIGHT]

In addition to the amount, the research team also shed a light on the fruit and vegetables that provide the greatest protection against chronic diseases.

The following fruits and vegetables may help prevent heart disease, stroke, cardiovascular disease, and early death: apples and pears, citrus fruits, salads and green leafy vegetables such as spinach, lettuce and chicory, and cruciferous vegetables such as broccoli, cabbage and cauliflower.

Dr Aune attributed a number of potential explanations for the protective benefits of fruit and vegetables: “Fruit and vegetables have been shown to reduce cholesterol levels, blood pressure, and to boost the health of our blood vessels and immune system.

“This may be due to the complex network of nutrients they hold. For instance they contain many antioxidants, which may reduce DNA damage, and lead to a reduction in cancer risk.”

He went on to explain that it is the interaction and cumulative benefit of eating a wide-range of compounds, as opposed to focusing on specific compounds that provide the optimal benefit.

This is why eating whole plant foods is a far more effective strategy than focusing on specific vitamin supplements to build a defence against life-threatening diseases, he added.

In addition to eating a healthy, balanced diet, engaging in regular exercise is a tried-and-tested way to ward off health threats.

As the NHS explains: “Regular exercise will make your heart and blood circulatory system more efficient, lower your cholesterol level, and also keep your blood pressure at a healthy level.”

The health body recommends doing at least 150 minutes of moderate-intensity exercise every week to keep the risks at bay.