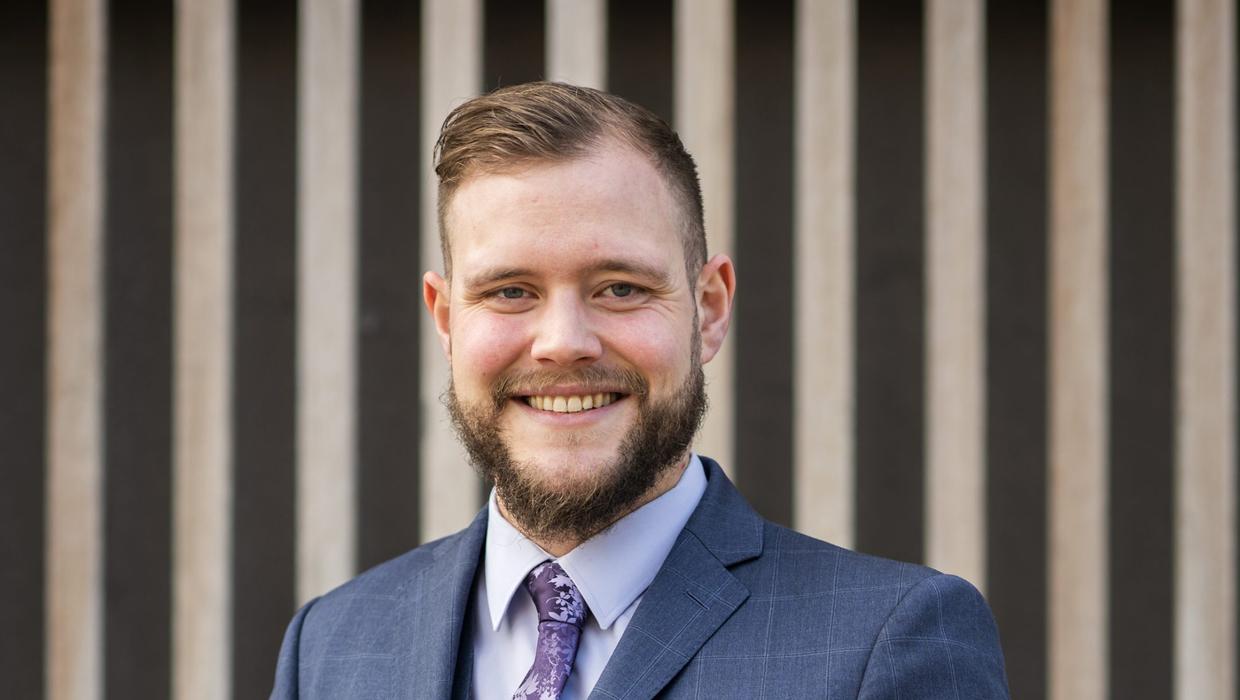 The passion for justice that informs Johan Verbruggen’s work as part of solicitors Callan Tansey’s medical negligence department, is both professional, and personal.

ust a few weeks ago, Verbruggen settled a case for a six-year-old girl who suffers with partial paralysis of her left arm and postural difficulty – a condition known as Erb’s palsy – following a difficult birth. It is the same condition Johan himself has.

“I was born in Galway,” he says, “although it’s not a Galway name – my granddad is from Belgium.” His parents moved from Dublin to Galway, where Johan’s father set up a veterinary practice, after the birth of Johan’s elder brother in 1987.

That birth had been difficult – “mum is diabetic 1, which means a high-risk pregnancy, because diabetics tend to have big babies. My brother was 8lbs, which is reasonably average, but when he was being delivered, his shoulder got caught – shoulder dystocia – and they struggled to get him out” – but ultimately the correct manipulations were carried out and the baby released without injury.

For her second child, Johan, born in 1989, Mary was in Galway, and acquainted her obstetrician fully with her medical history. There were several ‘red flags’ in terms of warning about a difficult birth, including the size of the baby – Johan was induced three weeks early, by which stage he was already 11 lbs.

From the start, labour didn’t go well. “It didn’t progress,” Johan says. “I wasn’t coming along. When it was time to start pushing, even though I was so big. they allowed for my head to be delivered. Once that happened, they couldn’t get the shoulder out.” At that stage, it’s too late to switch to a c-section. The only option is to pull the baby out. In his case, the pulling, Johan was later told, “was so much that dad had to push the bed back towards the wall as the medical team pulled.”

“Once the head is delivered, you have about a 10-minute window before the baby starts suffering brain damage,” he explains. “The umbilical cord is being crushed in the birth canal so baby isn’t getting oxygen.” By the time Johan was finally delivered, “I was dead. It took four or five attempts to revive me.”

On the Apgar test, Johan scored zero after 10 minutes. A healthy baby should have a score of 10 after 10 minutes. “I don’t know why I’m not profoundly mentally disabled, and physically disabled beyond my arm,” he says. “I’ve seen babies born in better conditions, who have suffered worse injuries than me.” So yes, “I’m very lucky in one way. But my perception of it is that I should never have been allowed to get to that position. I should have been a c-section. I was a hair’s breath from cerebral palsy.”

Initially, Mary was told that she had pushed too hard, and later, by a second doctor, that she hadn’t pushed hard enough. Either way, she was sent home believing her son’s trauma was, somehow, her fault. “Mum carried around that blame and guilt for years,” Johan says. “It took going to a solicitor and getting a report from an obstetrician in the UK who said ‘this should not have happened…’ for her to believe differently.”

Mary was told that what happened was ‘just one of those things,’ and given no name for the condition Johan had. “They weren’t told the name ‘Erb’s palsy’ because that is known to be generally the result of a traumatic birth,” he says.

Johan’s parents chose to take a case of negligence on his behalf. “I owe them everything, really I do. I would have had until my 20th birthday – that’s the statute of limitation – to take a case. But they did it for me. I couldn’t thank them more. It’s not so much the compensation – they wanted to right the wrong that had been done.”

“There were four or five red flags that this was going to be a difficult birth, and they were seemingly missed,” Johan says. “That’s what the case was based on.”

The case was settled,without liability Johan was six – “they had told me about it, but not the ins and outs, just that they were going to get the doctor to say sorry, and give me some money. That meant a lot to me.”

Two years after the case settled, Mary set up the Erbs Palsy Association. She had been told that Johan was the only child in the country with such an injury. Within three years, they had 200 people known to the society with similar stories.

Growing up, Johan understood his condition as “I had a good arm, and a bad arm. In primary school, the kids noticed but there was no bullying – they knew me and accepted me. But I couldn’t play sports – Gaelic football, rugby, boxing, all of which I loved, so that was tough. I could play football, but I wasn’t any good because my balance was bad. I did feel angry and frustrated about that.”

“Then, I got to 12/13, when the self-awareness, awareness of the opposite sex starts… I went to secondary school in the city; you’re in with a bunch of people who don’t know who you are… having Johan as a name didn’t help, but the arm really didn’t. I wasn’t bullied – I was slagged, but in an all-boys school you’re going to get slagged about something. You learn to get on with it. You can’t sit around and reflect on it. I’m glad to have had that experience. It does toughen you up. But at the time, it was hard.”

He also had “occupational therapy, physical therapy, speech and language all throughout my childhood. During the summertime, when my friends were out playing, I’d have to go to physiotherapy three times a week.

“Every six weeks, I was going to an osteopath in London, because mum had no faith in the Irish medical system. That all took away from my fun time.”

Initially, Johan’s parents were told he would be “mentally deficient”. It became apparent that he was no such thing, and indeed, “I was top of my class from first to fifth class,” but in secondary school, “I wasn’t the best student. I had more than the proverbial chip on my shoulder – I had an actual chip on my shoulder. I probably would have left school early and done a trade, if that had been an option, but it wasn’t. And that’s a blessing in disguise in one way – if I had both of my arms fully functioning, I might have left school early.”

Read More:  Not So Hot on Hormonal Birth Control? There Are (Lots of!) Other Options

Instead, he continued with school, got a better Leaving Cert than he expected, and went to study law. “I enjoyed it, particularly tort and criminal. I was leaning more towards criminal side, then one day I bumped into an old teacher in town, he asked what I was planning on doing, and I said, ‘medical law,’ because I had in fact been thinking about it, and I thought it would impress him more than criminal. He said ‘I can put in a character reference for you with Callan Tansey…’ And that was that.

“Once I started working in this area, I loved it. I live for this stuff. I am determined to hold accountable those who should be accountable. If one medical professional stops and thinks ‘let’s check the baby’s size…’ and has that kind of internal monologue, I’d be happy. Compensation is the last thing for most people – they want an apology, although they rarely get one, and they want to stop this from happening again.”

And, “in the last four or five years of doing my work, I see my condition is not something to be ashamed of, but something to be proud of, because it is something I’ve had to deal with that most people don’t have to. And I know that when I’m talking to parents of other children in this position, they are really grateful to have me on their side, because they know I get it.”

Unfortunately, the issues that affected Johan’s birth, still happen. “I’ve had two cases in the door since the start of the year,” he says. “My partner had a baby in August, and I am eternally grateful to that obstetrician. More than most people, I know the risks involved, I know how quickly it can go wrong, and I know what happens when it does go wrong.”