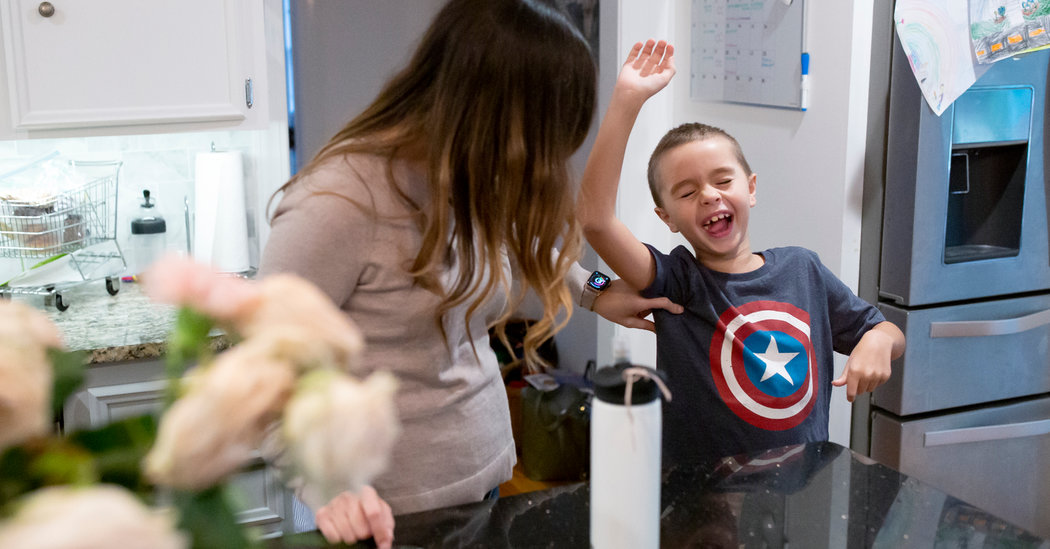 Eight-year-old Blake Collie was at the swimming pool when he got a frightening headache. His parents rushed him to the emergency room only to learn he had a brain aneurysm. Blake spent nearly two months in the hospital.

His family did not have traditional health insurance. “We could not afford it,” said his father, Mark Collie, a freelance photographer in Washington, N.C.

Instead, they pay about $ 530 a month through a Christian health care sharing organization to pay members’ medical bills. But the group capped payments for members at $ 250,000, almost certainly far less than the final tally of Blake’s mounting medical bills.

“Just trust God,” the nonprofit group, Samaritan Ministries, in Peoria, Ill., said in a statement about its coverage, and advises its members that “there is no coverage, no guarantee of payment.”

More than one million Americans, struggling to cope with the rising cost of health insurance, have joined such groups, attracted by prices that are far lower than the premiums for policies that must meet strict requirements, like guaranteed coverage for pre-existing conditions, established by the Affordable Care Act. The groups say they permit people of a common religious or ethical belief to share medical costs, and many were grandfathered in under the federal health care law mainly through a religious exemption.

These Christian nonprofit groups offer far lower rates because they are not classified as insurance and are under no legal obligation to pay medical claims. They generally decline to cover people with pre-existing illnesses. They can set limits on how much their members will pay, and they can legally refuse to cover treatments for specialties like mental health.

“Nothing is guaranteed,” said Dr. Carolyn McClanahan, a physician who is also a financial planner in Jacksonville, Fla. “You have to depend on the largess of the program.”

The main requirement for membership is adherence to a Christian lifestyle. And the alternative sharing plans keep flourishing, especially now that the Trump administration has relaxed rules to permit alternatives to the A.C.A. that don’t provide such generous coverage.

But state regulators in New Hampshire, Colorado and Texas are beginning to question some of the ministries’ aggressive marketing tactics, often using call centers, and said in some cases people who joined them were misled or did not understand how little coverage they would receive if they or a family member had a catastrophic illness.

On Monday, Washington State fined one of the larger health-sharing ministries, Trinity Healthshare, $ 150,000 and banned it from offering its product to state residents because it was operating as an unauthorized insurer.

In December, Nevada insurance regulators warned consumers to beware of these plans. “They may seem enticing because they may be cheap, look and sound like they are in compliance with the Affordable Care Act (‘A.C.A.’), when in reality these plans are not even insurance products,” the department said.

The Texas attorney general brought a lawsuit last summer against Aliera Healthcare, which marketed Trinity’s ministry program, to stop it from offering “unregulated insurance products to the public.” The Houston Chronicle featured one couple who was left with more than $ 100,000 in unpaid medical bills. Trinity said most members are satisfied with its services.

Aliera, which says it has stopped offering its plans in Texas, said it is working with regulators to resolve their concerns. The company says it has taken steps to make sure its customers are not confused about what they are buying.

Because the groups are not technically considered insurance, they operate with no government oversight. “Regulators haven’t been willing to assert any control or regulatory authority over these plans,” said Katie Keith, who serves as a consumer representative to the National Association of Insurance Commissioners and teaches health law at Georgetown University. “They feel their hands are tied. At the end of the day, it’s not insurance.”

Families who have joined the groups recount winding up with medical bills not covered by the ministries, with no legal way to appeal decisions to reject coverage for care. Some groups ask their members to push hospitals and doctors to write off their bills rather than use members’ money to pay their expenses.

“These plans offer a false sense of security,” said Jenny Chumbley Hogue, who runs an insurance agency in the north Dallas area of Texas. She refuses to offer them to her clients.

Several states have taken action against one ministry they say has deceived people about what they are buying. “The nature of what we’re hearing from consumers around the state is absolutely heart breaking,” said Kate Harris, chief deputy insurance commissioner in Colorado, one state that is trying to prevent the ministry from operating there.

But health-share ministries have become particularly attractive to people like the Collie family who don’t qualify for a federal subsidy and can’t afford an A.C.A. plan. Even though premiums in the A.C.A. market have stabilized, critics of the law insist people need alternatives. “That’s the real driver behind the growth,” said Dr. Dave Weldon, a former Republican congressman from Florida who is president of the Alliance of Health Care Sharing Ministries, which represents the two largest groups.

When Dan Plato left his job to become self-employed as a consultant, he discovered that an A.C.A. policy for 2018 would cost his family around $ 1,300 a month. “It was very expensive and beyond our needs,” he said. Membership in Liberty Healthshare, a ministry established by Mennonites in Canton, Ohio, was less than half the price, according to Mr. Plato, who blogged about his experience.

But some Liberty members reported trouble getting their medical bills covered. Mr. Plato says a small bill for flu shots went unpaid and ended up in collection. At the end of the year, he was left wondering if Liberty would be able to cover the family in the event of a serious medical emergency. “It’s not something we could trust in that situation,” said Mr. Plato, who switched to one of the plans offered by United Healthcare also exempt from the A.C.A. rules for 2019.

Robyn Lytle, who works as an event planner in Chicago, joined Liberty for 2018, only to find that her daughter’s medical tests were never paid. “It’s been a year and a half, and I’ve been sent to collection,” said Ms. Lytle, who says Liberty had covered some of her family’s other expenses. She switched to an A.C.A. plan for 2019.

Other people complain that the ministries can be vague about coverage. Greg Snider and his wife joined Medi-Share, the program offered by Christian Care Ministry. Based in West Melbourne, Fla., Medi-Share says it has more than 400,000 members across the country.

Mr. Snider said he had just dropped traditional coverage when his wife was diagnosed with a heart condition, but he says he was assured by Medi-Share that her care could still be covered. She underwent surgery last year to address an abnormal heart rhythm. “After the procedure, the bills start rolling in,” Mr. Snider said, including $ 177,000 for the surgery alone.

Mr. Snider says Medi-Share urged him to plead with the hospital after determining he would owe more than $ 100,000. He said he had assumed the $ 800 a month he paid into a pool would help cover the expenses. After he tweeted his frustrations, the ministry told him that he would owe only $ 1,500 for the surgery because the hospital had forgiven the rest, he said. He now owes thousands of dollars in related medical bills and is unsure of their status.

If Medi-Share decides not to pay, Mr. Snider knows he has little recourse: “It is completely and solely up to them.” He has since gotten a job where he is covered under his employer.

Medi-Share says that more than 80 percent of the $ 774 million it collected last year went to members’ medical bills. “We take great care to ensure prospective members understand what is considered a pre-existing condition and what is eligible for sharing,” it said.

It does its part to reduce medical spending, it says, through negotiating with doctors and hospitals and claims it saved members more than $ 500 million last year. “We consider this process to be one way in which we contribute to the overall objective of reducing medical costs,” the ministry said in a statement.

Medi-Share says it has an extensive network of more than 700,000 providers. But even if a member goes to an in-network provider, the ministry may still decide not to pay the bill. “Fundamentally, we have found that there is often a lack of understanding of what is covered,” said Brendan Miller, an executive with MultiPlan, which arranges networks for Medi-Share as well as insurers.

That uncertainty has led some hospitals and doctors in the MultiPlan network to refuse to treat ministry patients rather than absorb unpaid costs.

Colorado is one of several states, including Washington, Texas and New Hampshire, that are trying to stop Trinity Healthshare, and its administrator, Aliera Healthcare, from operating in their states because they say the ministry is misleading its residents.

Trinity says its website makes clear that the ministry does not offer health insurance.

Regulators also worry about these plans siphoning off healthy individuals from the A.C.A. marketplaces, leading to higher premiums for Obamacare policies.

“The ministries have been very concerned about bad actors invading this space,” said Dr. Weldon, the alliance president, who says his members are very clear that they are not insurance companies. “They all operate call centers, and they all bend over backward to inform people inquiring that it is not insurance,” he said.

In the case of Samaritan, which says it covers 271,000 people, the ministry pointed to its Save to Share program, where members can contribute extra to cover more of their bills.

With Blake’s bills likely to far exceed the cap — Mr. Collie has not yet tallied them — he created a GoFundMe account to help pay for his son’s care.

Mr. Collie says the ministry remains a viable alternative, noting it paid for numerous medical bills before his son’s hospitalization. “Every single person has prayed for me and my family,” he said. But he was enormously relieved when he found out recently his son qualified for Medicaid, the state-federal insurance program, which will cover the boy’s full medical care.

In some states, officials are starting to consider requiring the groups to register, to obtain more information for consumers.

Peter V. Lee, a former Obama administration official who now runs the California A.C.A. marketplace, said ministries should be subject to some oversight, including disclosure of how much of the money collected is spent on care.

“There should not be a religious exemption for transparency — where the money goes and if it will be there if consumers need it,” he said.

California is also requiring brokers, who are paid hefty commissions by some of the ministries to enroll members, to make sure their clients understand they are not buying insurance.

Some ministries, like Samaritan, say they do not use brokers or agents. “We also have never, nor will we ever, use insurance agents or brokers to sell Samaritan because we don’t want people to confuse us with insurance,” it said.