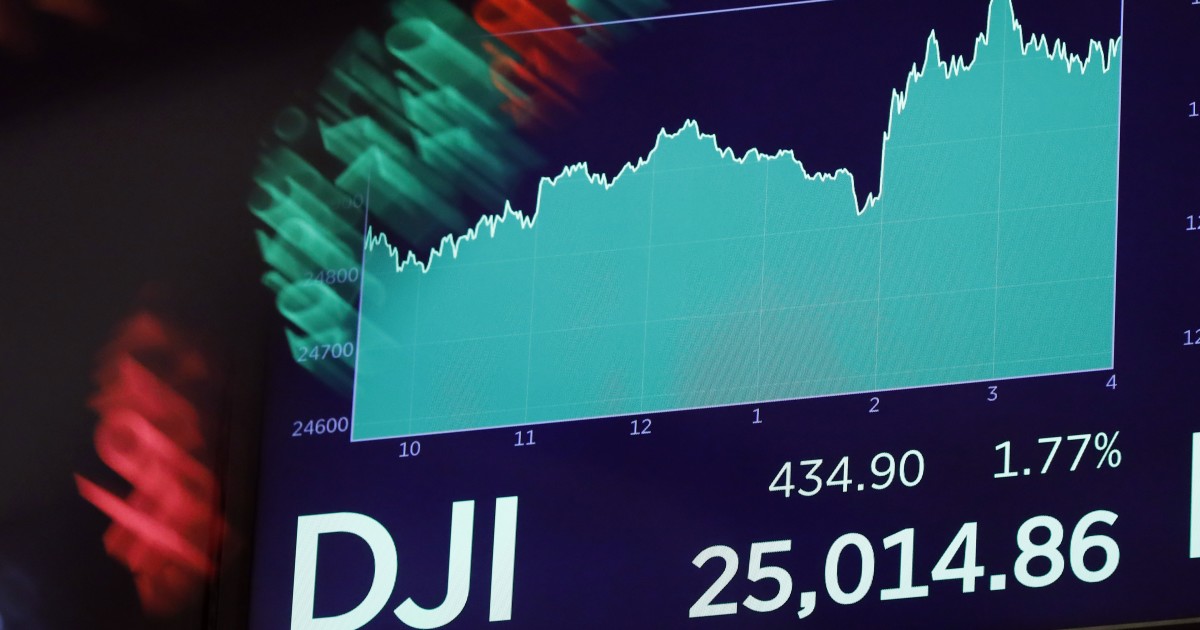 Stocks rallied Wednesday, adding to a recent hot streak and signaling that investors think the worst of the economic upset from the coronavirus pandemic is over.

The Dow Jones Industrial Average jumped 2.1% Wednesday, and the S&P 500 rose 1.4%, marking its longest winning streak since early February. The S&P 500 performance Wednesday was led by energy, financial, and industrial groups, which have sustained the worst losses in 2020.

The market has largely overlooked the protests that have spread across the country. As states reopen sectors of their economies, markets have regained much of the losses suffered while the number of coronavirus cases was rising exponentially. The S&P 500 is now only about 8% off its pre-pandemic high.

“Investors are continuing to ignore the three P’s — pandemic, protests and politics — and are instead focused on what increasingly is being interpreted as a quicker and better than expected recovery in the economy and the idea that that may portend a quicker recovery for earnings as well,” CIBC Private Wealth Management Chief Investment Officer David Donabedian told the Wall Street Journal .

U.S. coronavirus cases have surpassed 1.8 million as of Wednesday, and at least 107,000 people have died, according to Johns Hopkins University data.

Of the total $ 1.6 trillion in aid passed by Congress in March’s CARES Act, roughly 70% has been spent or distributed, according to the Wall Street Journal. Congress has passed four pieces of emergency legislation since the coronavirus pandemic began. Now, Democrats and Republicans are debating whether a fifth legislative package is necessary. Senate Majority Leader Mitch McConnell has said Congress should wait to work on another bill until it gets a better picture of how helpful federal assistance has been. House Democrats, on the other hand, have already approved a $ 3.5 trillion package that includes a second round of direct payments to families and additional spending for public health systems and providers.

Read More:  Why would blood pressure fluctuate so much

Anders Tegnell, Sweden’s top epidemiologist and the engineer of the country’s controversial anti-lockdown strategy, said Wednesday that more aggressive restrictions should have been implemented to help prevent the roughly 4,500 deaths. He stopped short of saying the country should have enacted a lockdown policy, adding that it remains to be seen which coronavirus responses paid off most in other countries.

“If we were to encounter the same disease again, knowing exactly what we know about it today, I think we would settle on doing something in between what Sweden did and what the rest of the world has done,” Tegnell said.

The Trump administration is banning Chinese airlines from flying to the United States starting June 16, a move that will escalate tensions with China, which has not yet allowed flights from the U.S. since travel was halted due to the coronavirus pandemic. The ban will affect the operations of seven Chinese airline companies, including Air China Limited and China Eastern Airlines.

Hydroxychloroquine did not prevent healthy people exposed to the coronavirus from getting the disease, according to results from the first randomized trial of the drug published Wednesday in the New England Journal of Medicine. Researchers at the University of Minnesota Medical School enrolled more than 800 adults in the U.S. and Canada who were exposed to someone with the coronavirus through their jobs as healthcare providers or first responders, or because they lived with someone who had COVID-19. Overall, 12% of the people in the sample who were given the drug developed COVID-19, while 14% who were given the placebo also got sick. Researchers pointed out there is not a statistical difference in both groups’ results.

Read More:  Experts warn daily Covid cases could be as high as 45,000 in England

A study of hydroxychloroquine published in late May by medical journal the Lancet was found Wednesday to have relied on data from a company called Surgisphere that appears to be highly suspect. The Lancet released an “expression of concern” about the study during the investigation, in which researchers concluded that hydroxychloroquine can increase the patient’s risk of death.

Two weeks after Israel fully reopened schools, another coronavirus outbreak has forced government officials to close 15 schools where students and staff were infected. A new policy order from Prime Minister Benjamin Netanyahu said that any school with at least one new case of the coronavirus will be closed, the Wall Street Journal reported Wednesday.