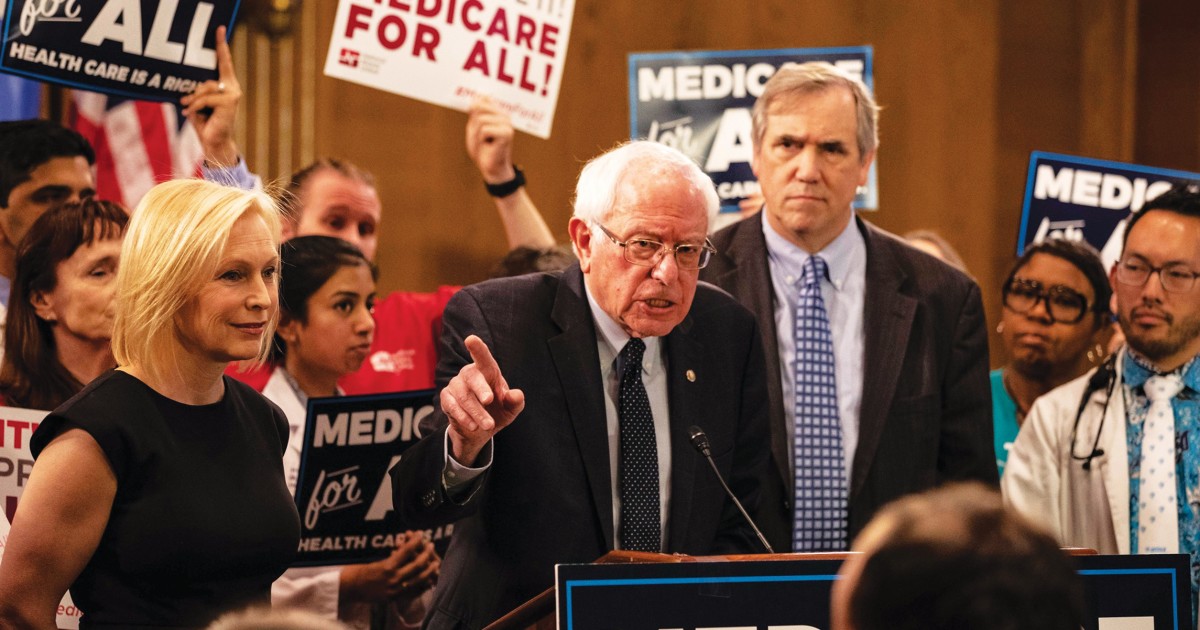 Democratic presidential candidate Bernie Sanders frequently points to success stories in other developed countries when pushing for his Medicare for All healthcare plan.

“I want to end the international embarrassment of the United States of America being the only major country on Earth that doesn’t guarantee healthcare to all people as a right, not a privilege,” Sanders has said frequently on the campaign trail.

But if his Medicare for All Act were to become law as written, then the U.S. government would cover more services than governments anywhere else in the world. Other countries that guarantee coverage to their citizens omit government coverage for some medical goods and services, and many of them tap private health insurance or patient fees to help fill the gaps.

“I don’t know what the constraints are that are built into the Medicare for All spending, and without constraints, Medicare for All becomes unmanageable,” said Dr. Ashish Jha, the director of Harvard’s Global Health Institute who is doing a large project on universal health systems around the world. “There are no countries that don’t have constraints. The idea that everything is covered for everyone is unprecedented.”

Canada’s national government plan excludes coverage for prescription drugs, dental, vision, and long-term care. The United Kingdom turns down treatments if they’re too expensive or if they don’t extend longevity and quality of life. People on Australia’s public system have to get private coverage for dental and vision. In Singapore, patients can pay more to receive deluxe care, and everyone has a savings account to help pay for medical services.

Despite some gaps, all of these places are known to provide “universal healthcare,” a term that generally refers to countries where everyone’s medical care is covered. The United States isn’t on the list because it has nearly 30 million uninsured. It also pays more for prescription drugs and medical services than anywhere else in the world.

Each country with universal healthcare has a different approach.

“It’s a little bit of a misnomer or misunderstanding to think about countries’ health systems as uniform,” said Roosa Tikkanen, a research associate at the Commonwealth Fund’s International Program in Health Policy and Practice Innovations. Countries’ systems vary significantly even within their own borders, she explained. Some regions step up above what national plans offer. Other countries omit services for most people but then do cover those services for children or the poor.

“It’s not that everything is covered for free for everyone, much like the Bernie Sanders plan,” Tikkanen said.

Sanders’s Medicare for All Act doesn’t have much precedent in other countries. It would throw out nearly all private health insurance in favor of enrolling everyone in a government plan. It also comes with a high price tag. The Committee for a Responsible Federal Budget puts estimates for the cost of Sanders’s plan at an additional $ 28 trillion over 10 years.

The new government plan would pay for a sweeping array of medical benefits that are seen in other similar countries, including coverage for hospitals, doctors, and emergency services. It would pay for lab tests, prevention, maternity care, and mental health, and people would pay no more than $ 200 a year for prescriptions.

But it would also provide benefits that aren’t common for governments to cover in other developed countries, including vision and dental. And in the latest iteration of the Medicare for All Act, Sanders added coverage for long-term care. That’s a massive cost frequently left out of other national service plans — with few exceptions, as in Japan. There, the country offers a robust long-term care benefit that focuses on helping people age at home.

In some countries, the government provides benefits but not universally at the national level. For instance, France doesn’t offer vision and dental to everyone but does set up free coverage for low-income people. In Denmark, different regions organize and finance home care and hospice.

There aren’t many services left out of the Medicare for All Act. Sanders cited cosmetic surgery as one service that private health insurance might have a role in providing, even though coverage for cosmetic procedures doesn’t currently exist.

Other services not included in Medicare for All are institutional care, healthcare for overseas military, and treatments for foreign visitors who come to the U.S., according to an analysis by the left-leaning Urban Institute.

But if Medicare for All becomes law, that list would likely grow. Jodi Liu, who studies healthcare financing at the RAND Corporation, said there would still be many decisions that would fall to government officials or a panel appointed by the government about what gets covered, a common practice in other nations.

“This is such a large sweeping change that there would be so many things that would be determined not in the legislation but through implementation and executive offices,” Liu said. “There is no way the legislation could lay out all those pieces.”

Gerard Anderson, a professor of health policy and management at Johns Hopkins Bloomberg School of Public Health, noted that countries also control costs through delays in care or delays in approving new treatments.

“That’s the major mechanism they use as opposed to not providing as many benefits,” he said.

Debates over how the government should control healthcare costs often get met with backlash by American lawmakers. A now-defunct part of Obamacare that drew outcry by conservatives would have allowed the government to set up a board of experts to find ways to slow the growth in Medicare spending. The panel raised concerns among critics that Medicare would get cut through rationing, and accusations the law established “death panels” ensued.

Dr. Krishna Udayakumar, founding director of the Duke Global Health Innovation Center, noted that setting up a universal healthcare system would require not just looking at what is covered but deciding who and how much gets paid into the system. Other tools that countries use include higher taxes, imposing small fees on patients, and paying doctors and nurses less to control costs. Different cultures make such decisions differently according to their values, Udayakumar said.

“The whole concept of universal health coverage is complex because of all of those [factors],” he said.