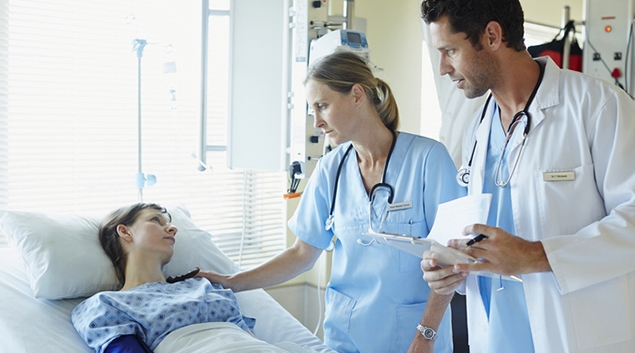 Pressure ulcers are a major health issue for providers and kill more patients a year than any single cancer except lung cancer, according to one expert who, with other researchers, is releasing the results of new findings in the field next month.

Pressure ulcers, also called pressure injuries and in the vernacular, bedsores,  are also costly to treat.

Nationally, the U.S. spends about $ 26.8 billion a year on treatment costs for pressure ulcers, according to Martin Burns, CEO of BBI, Bruin Biometrics.

Pressure ulcers cause the number one patient harm in a care facility, Burns said. The Agency for Healthcare Research and Quality data shows other hospital acquired conditions – such as adverse drug events and surgical site infections – have gone down, but the number of pressure ulcers continues to climb.

This is because pressure ulcers are generally found only after a wound appears, and this can be too late to stop an infection from getting into the body.

But what Burns and researchers from the University of California, Berkeley have discovered is that pressure ulcers form from the inside of the body, out, not the other way around. Damage occurs at the cellular level, he said.

Both the Centers for Medicare and Medicaid Services and the National Health Service in the United Kingdom are interested in the findings, according to Burns, who said he has recently spoken with representatives from both agencies.

On November 15, Burns and the UCLA team of researchers will present their findings before the 2019 International Guideline Launch of the National Pressure Ulcer Advisory Panel in Los Angeles.

BBI has a business interest, as the company has been granted U.S. Food and Drug Administration marketing authorization for a SEM Scanner, a wireless handheld device to assess patients who are at increased risk for pressure ulcers.

Burns said the larger goal is to push the understanding of the underlying mechanism of why pressure ulcers develop, to open up opportunities for clinical guidelines and to work towards prevention.

“With the right care, about 95 percent are preventable,” Burns said.

On financial reasons alone, addressing pressure ulcers can save the average hospital about half a billion dollars a year.

“If I’m a CFO that turns over $ 13 billion a year, they’re spending about half a billion on pressure ulcer screening and treatment,” Burns said. “If I’m able to prevent half of pressure ulcers and take out variable costs, then you end up saving half of your variable cost, about $ 100 million a year. You simply don’t incur the cost anymore. It goes directly to operating earnings. That’s $ 1.3 billion of added corporate value. There are no interventions that will drive such a large return as pressure ulcers.”

Pressure ulcers are wounds that occur over prominent bony areas, such as the heels, buttocks, the side of a leg or the back of the head. They form when patients are bedridden or are confined to a wheelchair.

Some medical devices that exert pressure over the nose and cheekbones can also cause pressure ulcers.

Pressure ulcers come in grades from one to six, with one being intact skin, and in the later stages, the skin is fully broken and the bone exposed.

Pressure ulcers can lead to deadly sepsis or other hospital-acquired infections.

One of the most famous cases is that of the late “Superman” actor Christopher Reeve, who became a quadriplegic from a fall off of his horse. He developed a pressure ulcer and died at the age of 52. The cause of death was listed as sepsis.

About 2.5 million people a year suffer from a pressure ulcer, and an estimated 60,000 die. If pressure ulcers were cancer, the condition would kill more people than every type, except for lung cancer, according to Burns.

THE PROBLEM FOR HOSPITALS

Pressure ulcers are discovered only after they begin to appear on the skin, after they’ve been festering underneath.

Nurses regularly assess patients at high risk for a pressure ulcer, such as those confined to a bed or a wheelchair. Hospitals can then get the patient onto a different type of mattress that wicks away moisture and have orders for the individual to be turned every 12 hours. The risk of a pressure ulcer in trauma wards is 100 percent, Burns said.

What makes pressure ulcers problematic for providers, is that they most often  occur the day after admission, Burns said. If a pressure ulcer develops after a patient has been admitted, it’s considered the hospital’s fault, which subjects the provider to litigation and a 1% penalty from CMS.

“It’s hugely expensive,” Burns said,  “There hasn’t been the clinical understanding to get to a 95% prevention rate.”