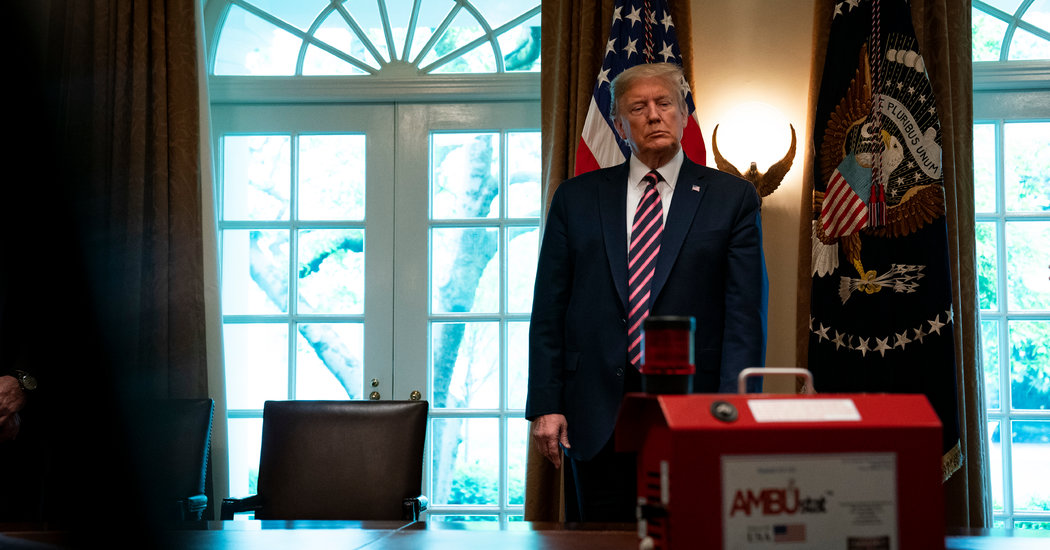 President Trump’s public statements about using disinfectants to potentially treat the coronavirus have put him in the company of pseudoscientists and purveyors of phony elixirs who promote and sell industrial bleach as a “miracle cure” for autism, malaria and a long list of medical conditions.

The president’s comments, at a White House briefing last week, have already prompted widespread incredulity, warnings from health experts and a spike in calls to poison control centers around the country. The makers of Clorox and Lysol urged Americans not to inject or ingest their products.

But some scientists fear Mr. Trump’s remarks could breathe life into a fringe movement that embraces the medicinal powers of a powerful industrial bleach known as chlorine dioxide. Among its adherents are Alan Keyes, the conservative activist and former presidential candidate who has promoted a chlorine dioxide-based product called Miracle Mineral Solution on his online television show.

The impact of Trump’s words “is going to be huge, especially among people who are desperate,” said Myles Power, a British chemist who works to debunk quack medical remedies. “My fear is it will cause widespread harm to people who think that drinking bleach can prevent or cure Covid-19.”

Mark Grenon, the self-described archbishop of a Florida church that sells Miracle Mineral Solution as “a wonderful detox that can kill 99% of the pathogens in the body,” took credit for Mr. Trump’s comments in a Facebook post on Friday. In an online radio show earlier this month, he said that he and his supporters had sent letters to the president about the product he peddles.

The White House did not respond to an email seeking comment after Mr. Grenon’s letter was reported by The Guardian last week. A person familiar with senior administration officials said they were not familiar with him or his letter.

It is unclear what inspired Mr. Trump to suggest disinfectants as a cure for Covid-19 — and he did not mention chlorine dioxide or bleach specifically in his comments during the White House briefing. But promoters of such solutions have seized on his remarks with vigor.

“Do you realize how freaking cheap and easy it would be to mass produce chlorine dioxide for 100,000’s of people?” Jordan Sather, a follower of the pro-Trump QAnon conspiracy theory, wrote on Twitter. “We could wipe out COVID quick!”

In a statement earlier this month, the Food and Drug Administration reiterated its warnings about ingesting chlorine dioxide, which it described as “dangerous and unapproved.” Chlorine dioxide is widely used in paper processing, by water treatment plants and as a disinfectant in hospitals.

“We will not stand for this, and the FDA remains fully committed to taking strong enforcement action against any sellers who place unsuspecting American consumers at risk by offering their unproven products to treat serious diseases,” the administration’s commissioner, Stephen M. Hahn, said in the statement.

Mr. Grenon and his son, Jonathan, who helps run the church, did not respond to interview requests sent via Facebook.

Chlorine dioxide has also been embraced by vaccine opponents who say the toxic substance treats autism. Emma Dalmayne, a mother of five autistic children who maintains a website about the dangers of so-called bleach cures, said the treatments have left some children with skin burns, seizures, damaged digestive tracks and other injuries. “The harm done to these kids has been unconscionable,” she said.

Melissa Eaton, a mother of a child with autism in North Carolina who campaigns against phony cures, said she sees overlaps between those who embrace chlorine dioxide as a curative, conspiracy theorists like Alex Jones, and the strident protesters who have clamored for loosening social distancing measures across the country.

“It’s like a Venn diagram,” she said. “What they all have in common is the idea that the government is hiding something from you. These people not interested in what scientists, doctors or the mainstream media has to say. ”

Dr. Alan Levinovitz, a professor at James Madison University who studies the relationship between science and religion, said Mr. Trump’s comments about disinfectants were in keeping with his previous support for conspiracy theorists, agitators against the deep-state and his promotion of two antimalarial drugs to fight the coronavirus, despite warnings from medical experts about their possible dangerous side effects.

“For a lot of people, Trump represents an alterative to pointy-headed experts in white lab coats who speak a language we can’t understand,” he said. “When you feel existentially threatened by a deadly virus, and the president says you can take control of your health with a product in your kitchen cabinet, that’s incredibly empowering.”

The problem, of course, is that ingesting or injecting industrial bleach can be deadly. Chlorine dioxide destroys red blood cells, wreaks havoc on the digestive system and can cause severe damage to the liver and kidneys.