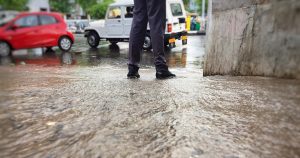 Water can overflow and flood for a slew of reasons, including excessive rain, ice melting from snowcaps, high sea levels and coastal storms. The water accumulation can be slow moving — or come on quickly — destroying everything in its path. “The vast majority of fatalities that we see during severe weather storms today are caused by flooding,” says Jake Marshall, Senior Director of Enterprise Preparedness and Emergency Operations with HCA Healthcare in Nashville, Tennessee.

But fortunately, there are steps you can take to protect yourself and your family from flooding. Here are some ways you can stay safe during a storm.

Have a flood plan in place. Delegate where you would go in an emergency situation and what your evacuation route would be.

If you receive a flood watch alert, that means there’s a possibility of flooding in your area. Listen to emergency instructions, figure out the highest floor you can safely get to and make sure your emergency kit — with water, food, any medications, batteries and a flashlight — is ready to go. Be sure to prepare your house by moving furniture to the highest floor, disconnecting all electrical appliances and, if told to do so, turning off your gas and electricity.

If you receive a flood warning, it means you should be ready for a flood:

Read More:  CBD Is Everywhere, but Scientists Still Don’t Know Much About It

“Listen to the advice of local authorities,” says Marshall. “And only attempt to move back in once they have declared the area safe.” There are many complications that can occur post-storm, like drowning or being hit by floating debris. Some people might think it’s safe to go back home or they may try to rescue a neighbor, but it’s important to keep your safety first. Don’t try to drive or walk over recently flooded areas.

After a flood, there’s also a risk of encountering contaminated water. “If someone does go into flood waters and reemerges seemingly safe, several weeks later we often see folks come down with very serious sicknesses,” says Marshall. These illnesses can be caused by bacteria, viruses and toxins lurking in flood water.

Plus, if there’s a fallen power source in standing water, it can cause electrocution. So, how do you avoid it? “Don’t enter the flood water and heed public evacuation warnings that are issued by officials,” says Marshall.

There are also certain areas you should avoid after a flood. Anywhere that standing water can sit and accumulate can become breeding areas for insects and parasites that may spread diseases. For instance, in newer communities and developments, storm runoff and rainwater may be collected in something called a water retention pond. These ponds can have some benefits to the community by helping to prevent flooding in homes and businesses, but may also pose potential health hazards such as insect borne illnesses. Stay away from these areas and spray yourself with bug spray.

Remember: Be aware of your surroundings, only leave your shelter area once you’re given the okay to do so and avoid flood water at all costs.

Sign up for the latest in health and wellness, news and updates.