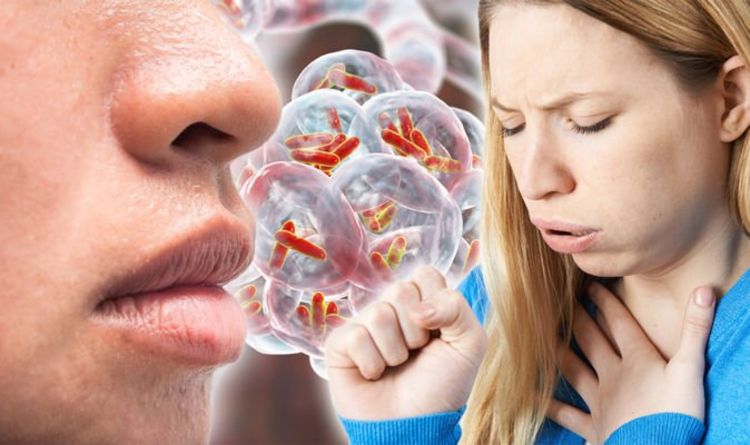 Whooping cough, also known as pertussis, is a highly contagious bacterial infection which affects the lungs and airways. And the hiding bacteria means people can unknowingly transmit the infection to other people leading to sporadic outbreaks of the condition, according to medics at University Hospital Southampton (UHS). Whooping cough is spread through the coughs and sneezes of an infected person. It causes repeated coughing that can last for two to three months or more and affects around 16 million people every year worldwide, particularly in developing countries, causing about 200,000 preventable deaths in children.

The researchers at UHS, led by Professor Robert Read, inoculated 34 human volunteers with Bordetella pertussis via nose drops and monitored them in a research facility for 17 days.

They assessed their immune responses before giving them an antibiotic to clear the infection.

The results, published in the journal Clinical Infectious Diseases, state that participants could be safely infected without developing symptoms and cleared of the bacteria within two days.

Professor Read, director of the NIHR Southampton Biomedical Research Centre, said: “The study showed that the bacterium which causes whooping cough can lurk silently in the nose and throat of even healthy members of the community.

“This is extremely important as it explains why we are seeing episodic outbreaks of whooping cough throughout the world, with serious disease occurring in those people who are not vaccinated or who had their vaccines a long time ago.”

A UHS spokesman said: “Adults suffer a milder form of the disease compared to young children but can still have an unpleasant cough for up to three months, while babies under the age of six months can be vulnerable to severe and life-threatening complications.

“Although a vaccine is offered to all babies in the UK – where 18 have died as a result of the infection since 2012 – it does not offer lifelong protection and is now less effective than it was 15 years ago.

“This is why the Southampton discovery is so significant – it means the bacteria can spread from person to person, silently, and cause disease in those who are not immune, including babies, and those not vaccinated.”

The first symptoms of whooping cough are similar to hose of a cold, according to the NHS, such as a runny nose, red and watery eyes, a sore throat, and a slightly raised temperature.

Intense coughing bouts then start about a week later.

Treatment depends on the age of the person and how long they’ve had the infection.

The NHS advises: “Children under six months who are very ill and people with severe symptoms will usually be admitted to hospital for treatment.

“People diagnosed during the first three weeks of infection may be prescribed antibiotics to take at home – these will help stop the infection spreading to others, but may not reduce the symptoms.

“People who’ve had whooping cough for more than three weeks won’t normally need any specific treatment, as they’re no longer contagious and antibiotics are unlikely to help.

“While you’re recovering at home, it can help to get plenty of rest, drink lots of fluids, clean away mucus and sick from your or your child’s mouth, and take painkillers such as paracetamol or ibuprofen for a fever.

“Avoid using cough medicines, as they’re not suitable for young children and are unlikely to be of much help.”

The whooping cough vaccine in pregnancy protects your baby during the first few weeks of life; the best time to have it is soon after the 20th week of your pregnancy.

The 5-in-1 vaccine is offered to babies at eight, 12 and 16 weeks of age, and the four-in-one pre-school booster is offered to children by three years and four months.

These vaccines don’t offer lifelong protection but can help stop children getting it when they’re young.

Older children and adults aren’t routinely vaccinated, except during pregnancy or a whooping cough outbreak.

Call 999 or go to A& if you or your child has significant breathing difficulties, such as long periods of breathlessness or choking, shallow breathing, periods where breathing stops, or dusky, blue skin, or if signs of fits or pneumonia occur.

Experts have also warned of Aussie flu sweeping the UK this winter.