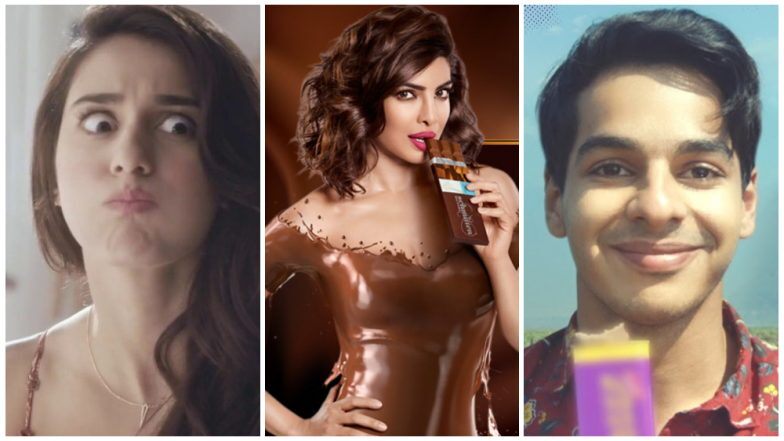 Today is celebrated as World Chocolate Day. Cadbury has launched the world’s first Cadbury Dairy Milk 3D Printer in Australia. We totally think it should have been India. Hear us out. Indian chocolate market is of worth Rs 9,000 crore as per reports. No wonder, biggest Bollywood celebs are roped in to endorse chocolates by brands. No, seriously. Bagging a chocolate advertisement is a pretty big deal for Indian celebs. It not just boosts the sales but also adds to the popularity of the celeb. Over the years, we all have brought thousands of chocolates, probably inspired by our favourite celeb selling it to us. World Chocolate Day 2019 Date: History and Significance to Celebrate The Sweet Delight!

So, while we wait for the 3D Chocolate Printer to be launched in India, we are going to do something that will only increase your cravings for chocolates. We are listing down the best chocolate ads featuring Bollywood celebs. SPOILER ALERT but you are going to be in need desperate need of chocolate by the end of this list. World Chocolate Day 2019 Special: 6 Common Myths About Chocolates Busted That Will Make You Want to Eat More of These Cocoa Treats.

The beautiful ladies starred in funny TVCs for a chocolate brand. The Rekha bit is our absolute favourite.

Here is the Sonam Kapoor version:

Priyanka starred in the ad for this luxury chocolate brands and looked absolutely stunning.

Disha has been an internet favourite for ages, now. The actress starred in a chocolate ad and won hearts. No, seriously. This ad was so talked about that it certainly boosted the sales. Of course, the beautiful song playing in the background became a huge hit.

Rani Mukerji starred in a pretty quirky ad for chocolate back in the days. She even emulated Basanti from Sholay for the ad, which was quite popular at the time. Recently, Ishaan Khatter was roped in the as the brand ambassador for the same chocolate brand. His ad featured him alongside The Great Khali.

Here is the Rani Mukerji version

Here is the Ishaan Khatter Version:

Preity Zinta was batting for the opposite team in the era of the Rani Mukerji ad. She was roped in by a competitive brand for cutesie ads.

So, which one of these ads is your absolute favourite? Or did we miss your favourite one? If we did do not forget to tag us in your favourite ad on Twitter. Use @latestly. Well, you must be craving for chocolate, so we should sign off.