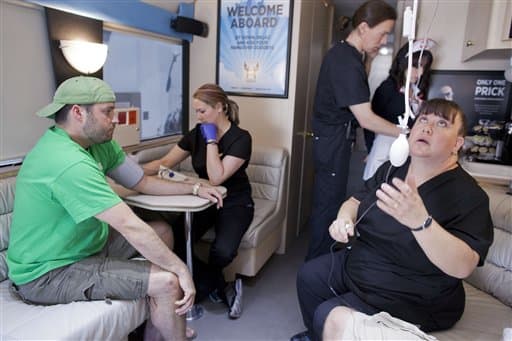 At Clean Market in Midtown, New Yorkers have a wide menu of healthy offerings to choose from such as superfood smoothies and bowls with a side of a “moon dust of choice.”

But if clean food isn’t enough, customers can also get a boost from vitamins delivered intravenously at the NutriDrip bar. The service is growing in popularity and attracting customers from fitness and lifestyle companies like Equinox to some major hotel chains.

NutriDrip sells 15 different vitamin infusions administered by medical professionals via an IV drip that takes about 30 minutes. The Nutribody drip aims to support fat loss with a combination of L-Carnitine, Taurine, Vitamin-C, B-Complex, among others. There are also the popular hangover remedies — Basic Recover, Super Recovery and Mega Recovery — which range in price from $ 119 to $ 199 depending on how much you’re hurting from the night before. The Nutriyouth drip boasts the ability to “help stop cellular aging in its tracks” with a mixture of anti-aging enzymes, molecules and vitamins for $ 599.

Founded five years ago, Nutridrip is looking to expand in 2020 with a Series A funding round in the first half of this year. Executives declined to say how much money they’re looking to raise.

“Over the last three years, IV nutrient therapy, specifically NutriDrip, has grown, at like a 60 to 80% year-over-year growth rate, even while opening new stores,” said co-founder Asa Kitfield. “So we’re really excited to see what sort of saturation the market can see on like a local and national basis.”

One of its new corporate clients is Wynn Hotel will be offering NutriDrip IV drips to its guests in Las Vegas in early 2020.

Emergency Medical Technician Debra Lund, right, checks the flow of an IV bag as EMT Stacey Kreitlow, second from left, takes the blood pressure of a patient and Dr. Jason Burke, third from left, and nurses assistant Crystal Willis look over his medical history while on Burke’s Hangover Heaven bus, Sunday, April 15, 2012, in Las Vegas. Burke treated 16 patients on the first day of his mobile treatment center for tourists who spent the night before drinking in all the nightlife Las Vegas has to of

“As many of our guests now expect a more holistic set of wellness options, we have evolved to include broader wellness themes related to functional wellness, physical fitness, and healthy cuisine,” said a Wynn spokeswoman, adding “providing IV therapy is one more way to help our guests maintain personal wellness routines while they are traveling.”

The Equinox Hotel in Hudson Yards also has been offering the service to guests when it opened last summer. Kitfield also tells CNBC, they’re slowing rolling out the service to other Equinox gym locations in early 2020 as well.

Celebrities, including Madonna, Rihanna and Simon Cowell, are reportedly fans of IV vitamin treatments, but it’s drawn some controversy.

“Anytime you poke a hole in somebody’s vein, there is some risk that they’ll bleed excessively. There’s also some risk that they will clot excessively,” said Dr. David Katz, Founding Director of Yale University’s Prevention Research Center. “So the risks are not great. And the risks are not very common, but there are risks, and the only way to justify any risk in medicine is by a greater likely benefit.”

He said there is “minimal evidence that there is any meaningful benefit for most people.”

Kitfield said they don’t make grand promises about their treatments at NutriDrip, but said they and their customers clearly believe in its benefits.

“When you look at our business where 50 to 60% of our revenue comes from regulars, and that’s why we continue to grow, the proof is kind of in the pudding, Kitfield said.”

According to the Global Wellness Institute, a nonprofit that tracks the industry, the global wellness market is a $ 4.5 trillion industry and while IV therapy and alternative medicine is a small portion of the overall spending, GWI says it’s among the fastest growing sectors.