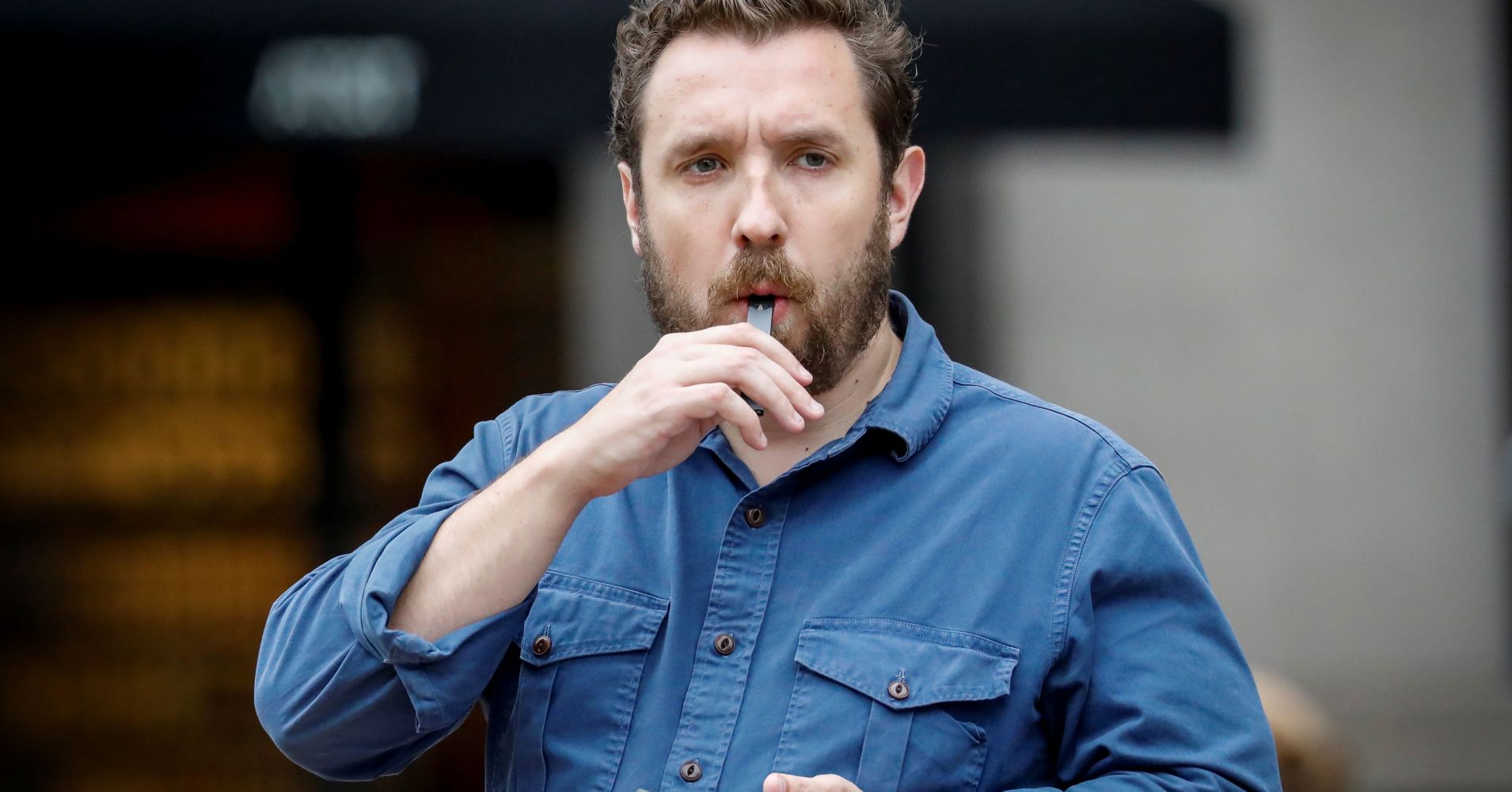 Larry McLaughlin bought his wife a Juul e-cigarette for Christmas as a stocking stuffer two years ago.

gotten a bad rap in recent months as federal health regulators question whether its popular candy flavors — including mango, creme and fruit — are at least partly responsible for the 77 percent surge in e-cigarette use among high school students over the past year.

Stories like McLaughlin’s is what Juul wants to hear more of — not the ones about teens usage. Juul CEO Kevin Burns told CNBC that Juul isn’t supposed to be cool for kids or hook non-smokers on nicotine. “It’s not designed for them. It’s not meant for them,” he said.

Adults like McLaughlin are Juul’s target market, and anecdotal evidence suggests it is helping some long-time cigarette addicts quit smoking as the product was intended.

Juul “was designed to replicate the nicotine experience and take away the combustion associated with smoking. And frankly, the product works,” said Burns, who was previously Chobani yogurt’s chief operating officer.

Quitting smoking is challenging, even though the risks are widely known. Cigarette smoking kills about 480,000 Americans every year, making it the leading cause of preventable death. The medical costs associated with smoking-related health problems are a staggering $ 170 billion a year, with an additional $ 156 billion in lost productivity from premature death, according to the Centers for Disease Control and Prevention.

Read More:  Can malaria be vaccinated against

Nicotine, by itself, is addictive. While it’s not considered harmful, it’s also not completely benign. Because e-cigarettes don’t undergo combustion, the name for the chemical process that occurs when tobacco burns and releases toxins, they’re inherently less dangerous than cigarettes. But e-cigarettes may pose their own long-term health risks, the National Academies of Sciences, Engineering, and Medicine has concluded.

“Comparing the safety of e-cigarettes to cigarettes in many ways is a fool’s errand because the cigarette is the deadliest consumer product on the market,” she said. At the same time, there just isn’t enough information on e-cigarettes to fully assess their potential health risks, she said.

Research has shown that nicotine impacts the developing brain of adolescents differently than adults, triggering depression, anxiety or trouble focusing. And kids who use e-cigarettes are more likely to try regular cigarettes, the National Academy of Medicine found.

The FDA has embraced e-cigarettes as a possibly less risky alternative for adult smokers, though it has said weaning adults off tobacco can’t come at the expense of hooking teens on nicotine.

“If we can switch every adult smoker fully to e-cigarettes, it would have a huge public health impact,” FDA Commissioner Dr. Scott Gottlieb said in an interview.

Ryan Storey knew cigarettes caused diseases like lung cancer, heart disease and diabetes when he started occasionally smoking at age 17 during breaks as a cashier at Kroger. By the time he was 18, he was up to one to one-and-a-half packs of Marlboro Reds a day.

Storey, who lives in Louisville, Kentucky and is now an auto technician, said he tried quitting cold turkey a few times. It never worked. At one point, he tried switching to a tank-based e-cigarette. He hated it. Earlier this year, a friend recommended Storey try Juul’s mango pods.

In the first three weeks, Storey said he didn’t smoke a single cigarette. Now two months in, he said he’s had a few but he hasn’t bought a pack since he started “Juuling.”

Founders Monsees and Bowen, who met as product design grad students at Stanford University, designed the Juul to be something they thought would be appealing to smokers. It’s a sleek device that allows users to simply pop in a pre-filled cartridge of nicotine liquid, which comes in flavors ranging from Virginia tobacco to fruit.

Launched just three years ago, Juul currently accounts for 75 percent of the e-cigarette market, according to Nielsen data from a recent four-week period.

While Juul is wildly popular, it is still unclear whether it can reliably help wean adults off tobacco. More research needs to be done before doctors really know, said Dr. Nancy Rigotti, a professor of medicine at Harvard Medical School and director of the tobacco research and treatment unit at Massachusetts General Hospital.

“We need a way to find out if Juul works for cessation, and if it does, we want to have it around but at the same time keep it out of the hands of kids,” Rigotti said

Juul points to survey data showing about half of the people who reported smoking cigarettes when they started using Juul said they had switched because of the device.

Thirty-two-year old Travis Barker said he was feeling tired and winded after 12 years of smoking. So he tried Juul. He went four months without smoking a single cigarette, until the digital sculptor’s work became really stressful and he temporarily regressed back to two packs of cigarettes a day.

Read More:  As Tanzania's LGBT fear for their lives, HIV will thrive

He’s back to Juuling again, but admits he hasn’t been able to totally shake cigarettes. He said he still smokes on occasion at parties on the weekends.

Health professionals say there is no safe amount of smoking. Some worry that e-cigarettes are creating dual users like Barker, or people who smoke both e-cigarettes and conventional cigarettes. They say more research needs to be done to determine whether that is just a natural phase in quitting.

Juul also needs to prove to regulators it can help adults stop smoking while stemming the recent spike in kids using its nicotine pods. Preliminary federal data show the number of high school students using e-cigarettes surged 77 percent this year with about 20 percent, or 3 million, saying they used the devices within the last 30 days.

Gottlieb has threatened to pull flavored products from the market and to require some products to undergo FDA review. The FDA also is considering confining sales to vape shops to make it harder for kids to buy. Juul and other e-cigarette makers have until Nov. 11 to submit plans to the FDA on curbing teen use.

Tobacco giant Altria in October said it would remove its MarkTen pod-based products and stop selling all flavors except for menthol or tobacco in its cig-a-like products until the FDA reviews and approves them. Juul has not yet publicly disclosed its plan.

“I’ve said many times, this opportunity [to curb adult smoking] can’t come at the expense of addicting a whole new generation to nicotine,” Gottlieb said, “and that’s precisely what we’re seeing happening.”

WATCH: How Juul made vaping cool and became a $ 15 billion e-cigarette giant