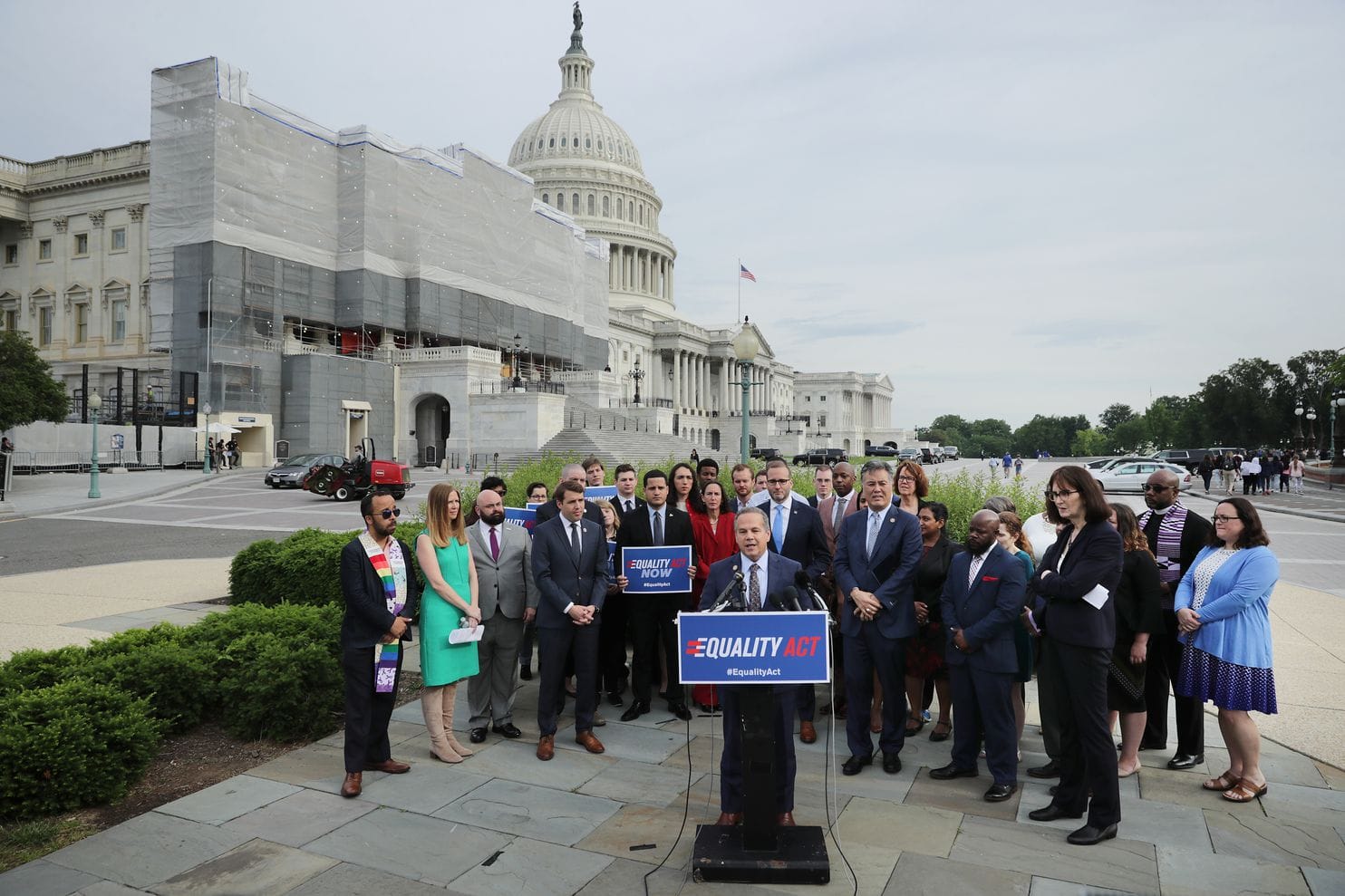 Openly gay politicians and their supporters called on the Republican-controlled Senate to pass the Equality Act. (Chip Somodevilla/Getty Images)
May 24 at 9:33 AM

The Department of Health and Human Services on Friday proposed a rule that civil rights groups warn may be used to deny care to transgender patients.

Under the Obama administration, HHS determined that protections in the health care system against discrimination “on the basis of sex” should apply to transgender people.

The director of HHS’s Office for Civil Rights, Roger Severino, said the new rule rejects that interpretation and will bring the regulations in line with what lawmakers originally intended.

“When Congress prohibited sex discrimination, it did so according to the plain meaning of the term, and we are making our regulations conform,” Severino said.

“It’s about the right of every American to be treated with dignity when they walk into an emergency room, meet a new doctor or find the right insurance plan. If permitted, this rule will promote ignorance and hate that no American should have to face while seeking care,” said Mara Keisling, executive director for the National Center for Transgender Equality.

Sen. Patty Murray (Wash.), the ranking Democrat on the Senate Committee on Health, Education, Labor and Pensions, said in a statement that the change was “blatantly harmful, discriminatory and wrong.”

“Patients don’t need the ideological judgment of President Trump, Vice President Pence or anyone else for that matter — they need to know that when they seek the health care they need, they won’t be turned away because of who they are,” she said.

Read More:  When trying to lose weight, morning meals are better than evening ones

Washington Gov. Jay Inslee said, “We will not sit quietly while the administration establishes separate and unequal policies that harm our transgender community.

The proposal is part of a broader effort by religious conservatives in the Trump administration to define gender restrictively. The result has been a weakening of protections for transgender people.

The Department of Housing and Urban Development on Wednesday proposed a rule that would allow federally funded shelters to turn away transgender people for religious reasons or force them to use bathrooms and sleeping areas that do not conform to their gender identity. A March 12 memo from the Defense Department outlined a policy that bans enlistment by anyone with a gender dysphoria diagnosis who is taking hormones or has transitioned to another gender. In addition, troops already in the military would have to serve according to the sex stated on their birth certificates.

Under the Obama administration, HHS had redefined protections against discrimination on the basis of sex to include one’s internal sense of being “male, female, neither, or a combination of male and female,” as well to cover termination of pregnancy.

The Heritage Foundation’s Emilie Kao, director of the DeVos Center for Religion and Civil Society, said that under that interpretation, physicians could have to provide sex reassignment procedures and abortions, and that Friday’s proposed change undoes the federal “overreach.”

“No American should be forced to violate deeply held beliefs, especially in hotly debated issues in health care. All Americans should be able to choose health care and health insurance that best fits their needs and beliefs,” she said in a statement.

Faith-affiliated care providers had previously challenged the Obama-era changes, arguing that the provision violates the Religious Freedom Restoration Act and the Administrative Procedure Act. In a lawsuit in federal court in Texas, a judge issued an injunction on enforcement of the rule, and in a filing in April, HHS attorneys agreed that the Obama-era rule is illegal and hinted that this new rule was in the works.

Severino said in a call with reporters that his office will continue to “vigorously enforce” civil rights protections for federally protected classes on the basis of race, color, national origin, disability and sex. However, he emphasized, the administration believes that “discrimination on the basis of sex does not include gender identity or termination of pregnancy.”

Severino added that the change is part of a pledge by the Trump administration to remove “unnecessary regulatory burdens” and would save approximately $ 3.6 billion in regulatory costs over five years. Under the federal rulemaking process, the public will have 60 days to submit comments. HHS would then consider the feedback and move forward with finalizing the rule.