Because of this year’s sharp increase in measles cases — which the Centers for Disease Control and Prevention has blamed a deliberate misinformation campaign by anti-vaccine activists for — many Americans are wondering whether they need to be vaccinated.

The C.D.C. emphasizes that children are the most important group to reach. Outbreaks spread rapidly in preschools and kindergartens, and young children often have infant siblings too young to get the vaccine.

But some adults, too, should consult with their doctors and consider getting the shot.

Who is immune to measles?

The vast majority of adults in this country are immune, according to the C.D.C. and other infectious disease experts. If adult Americans were not immune, the virus — which has been introduced from overseas every year since endemic circulation was eliminated in 2000 — would have spread widely before now.

But in the United States, outbreaks in the last 19 years have been largely confined to schools, churches, religious sects or other groups with low immunization rates.

Even the current tally of 704 confirmed cases is modest compared to recent outbreaks in some European countries. France had 2,913 cases last year, according to the World Health Organization; Italy had 2,686, and Britain had 953.

Which adults should consider a booster shot?

Adults who lack “evidence of immunity,” as the C.D.C. calls it, and are in any group with a slightly elevated risk of encountering the virus should consider getting a measles-mumps-rubella shot, the C.D.C. says.

Those groups include health care workers, adults about to travel overseas, college students, and anyone living in a neighborhood or community now experiencing a measles outbreak. 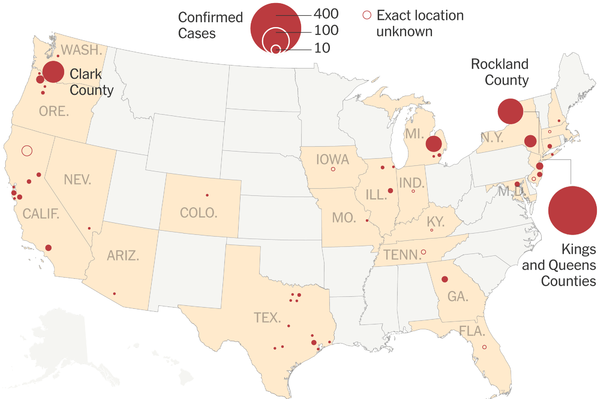 Where Every Measles Case Has Been Reported This Year

Measles cases have been reported in 22 states and the country is seeing the largest outbreak since 1994.

What is ‘evidence of immunity,’ and how do I get it?

Anyone born in the United States before 1957 is presumed to be immune, because virtually everyone caught measles back then. (Once you have endured a bout, you are almost always immune for life.)

Anyone whose medical records indicate that he or she had two doses of measles vaccine also is considered immune.

A doctor’s office can draw blood for an inexpensive test showing whether a patient has enough measles antibodies to be protected. Results are available in a few days.

Who should avoid the M.M.R. vaccine?

Pregnant women should not get the vaccine. But women who are thinking of getting pregnant and are not immune should have the shot at least one month before becoming pregnant.

Anyone with a life-threatening allergy to a vaccine ingredient or a weakened immune system should not get the shot. Nor should anyone with an immediate family member who has immune problems.

People with tuberculosis, with any condition that causes them to bleed or bruise easily, or who have recently received a blood transfusion or blood products — all should avoid the vaccine.

Anyone who has just had another vaccine should wait four weeks before getting the measles vaccine. Anyone who is moderately ill — with anything beyond a mild cold — should wait until he or she recovers.

In 1963, two competing vaccines by Pfizer and Merck were introduced in the United States. The Pfizer vaccine contained virus “killed” with a formaldehyde-like chemical; the Merck shot contained a live but weakened virus.

The Pfizer vaccine (delivered in three doses) had virtually no side effects, but its protection waned quickly. The Merck one (a single shot) lasted much longer, but gave some children fever and a rash.

Other countries had rival products, and millions of children were vaccinated in trials testing various multidose combinations. In 1968, Merck produced a safer live vaccine, which eventually became the standard. It conferred about 93 percent protection in groups to whom it was given.

In 1989, medical authorities in the United States decided that was insufficient and recommended two doses — at roughly ages 1 and 5 — to boost overall protection to 97 percent.

Alternatively, you could just get another shot.

Is it safe to have another measles shot even if you had them in childhood?

Yes. “If you don’t want to go through all the fandango of getting the test, it may be easier to just get the shot,” said Dr. William Schaffner, a preventive medicine specialist at Vanderbilt University Medical School. “There’s no downside to that alternative.”

If adults rush to be vaccinated, will there be a vaccine shortage that leaves children vulnerable?

At the moment, there is no shortage of measles vaccine, according to the Food and Drug Administration. (There are shortages of vaccines for hepatitis B, shingles and yellow fever.)

Dr. Nancy Messonnier, director for immunization at the C.D.C., also said there was currently “a sufficient supply.”

In response to the current outbreak, Merck “has taken steps to increase U.S. supply of our M.M.R.-II vaccine,” a company spokeswoman said.

If a shortage were to loom, the F.D.A. could take steps to forestall it, including moving supplies around the country to cover spot shortages or permitting the import of equivalent products from countries that meet F.D.A. standards.